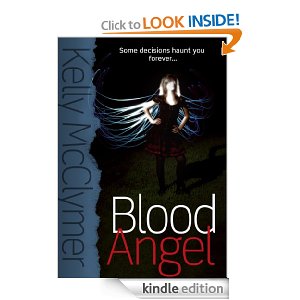 Author: Kelly McClymer
Genre: YA, Fantasy Paranormal
How long it's been on sale: Oct 2011
Current price: $4.99
Marketing: I'm traditionally published in historical romance and chick-litty YA, all under my name, which I think lends to genre confusion for my readers. I've done some promotion: a YA blog hop, a promotional thread on GoodReads with some other YA authors, Kindle Select (only 5 borrows; and around 1000 FREE "sales").
Total sold so far: 50
Link to book on Amazon: Blood Angel

Jamie Stone has one friend left, Amy Davidson, and she’s not sure she is his friend anymore. After all, he killed her and now her ghost, or spirit, or whatever she is, seems to be stuck visiting him in jail. Amy hadn’t been planning to die that day, but she had been to confession the previous Sunday and knew she should by rights be in Heaven. But if she is, life in Heaven is as confusing as life on Earth because her afterlife hasn’t come with an instruction manual. It’s come with a one-on-one connection with her killer, who used to be her best friend and now is the only person who can see her, hear her, and possibly help her figure out how to get wherever it is she needs to go.

That anyone survives high school, when I think about it, is a tribute to the power of mind over murder. I know it's tempting to ask why so many, but maybe the better question is why so few? So many minds seeking escape. So, relatively, little murder.

If I were going to paint high school, I'd need a canvas the size of the Atlantic ocean. Angular cement block buildings shaded some faded mix of puke and dinge best called Dismal Days. Fake wood desks with metal legs so shiny and hard-edged you can practically hear the echo when they scrape against the tiled floors. Metal lockers that special shad of grime gray that instantly recalls the frantic between-class open and shut clang. Oh, and high out of reach bells and big faced clocks that count off the seconds between eruptions that go off in some design only God and the principal understand, but which everyone – even the janitor – responds to like poor Pavlov's dog.

The round black bombs with fuses springing from the top that cartoon characters like Bugs Bunny and Wile E. Coyote use? That's how I'd paint the students. Bombs with backpacks. And maybe some teachers, too, although they'd be bigger, slightly more sophisticated and capable of triggering all the little bombs wedged into rows of desks.

Vicki's Comments: There are some elements of the cover I really like. I think the typography is done really well. I love the torn look on the side of the page. Design wise, it's well mapped out. I'm not sure the photo is drawing me in, though. Much of it is dark and hard to see. The face of the angel is obscured, which gives me a distanced feeling. The wings almost look hand-drawn in. I'm not sure that's the look you're going for. I'd give the cover a bit of a makeover.

The description is pretty good, but a little confusing. The first sentence seems to start out in Jamie's point of view, but then switches to Amy's point of view in the middle. The he's and she's seem to be wrong. And it doesn't help that Jamie can be a male or female name. I also would like more conflict in the description. She is in Heaven, or on the "other side" and now needs to get somewhere. Fine. What are the stakes? What happens if she doesn't reach her goal? The stakes need to be higher, in my opinion. Who is the antagonist? Because I get the feeling that Jamie isn't it. I like the premise of the book, but I would tighten up the blurb. That will help a lot, in my opinion.

The beginning is good. I did find one mistake - shad instead of shade - so I might suggest a proofreader go through it once more. But the voice of the character is good. I did find myself getting sucked into the monologue, which is good because I tend to gravitate toward action beginnings. (Not necessarily bombs or car chases, but the main character doing something.) The fact that I got interested in this is a good sign. I think the writing is good.

In my opinion, I would tweak the cover image and the blurb. I think it will sell better after that. What do you guys think?
Posted by Victorine at 8:44 AM

Email ThisBlogThis!Share to TwitterShare to FacebookShare to Pinterest
Labels: Fantasy Paranormal, YA