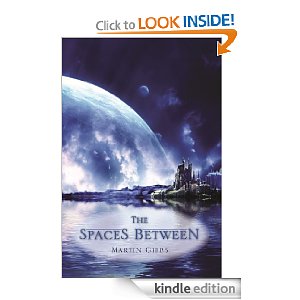 Author: Martin Gibbs
Genre: Fantasy
How long it's been on sale: Over a year
Current price: $3.29
Marketing: I have posted on Kindleboards, Amazon MOA, blogged, Twitter, Facebook, Goodreads
Total sold so far: 5
Link to book on Amazon: The Spaces Between

An exiled warlock sits fuming in his confinement. A not-so-secret holy Order can't keep its "elite" members alive. An idiot man-child talks to a dead man who leads him nearly to his death. A Holy Temple sits waiting for new tenants as the others were slaughtered by a demonic abomination. And a bull-headed mercenary is convinced he can trek off into the great north and learn magic.

Fantasy clichés are put to the test in this off-beat and dark fantasy story. There is an adventure, a journey, a quest if you will. But the heroes, if you dare call them that, will not even come close to saving the world.

Snow burst into the icy air in a great cloud of frozen flakes. The boot that set forth the torrent was worn, but sturdy, and constructed for the harsh climate. The cloud of snow caught a light breeze and whirled up and over the ramparts—quickly the individual flakes were scattered to oblivion. Large snowflakes fell lazily from the leaden sky, but many were carried away by the breeze. The boot swept once more at the stone rampart, and its owner looked down with a critical eye. No damage. Every inch he examined was as pristine as the day it was built those hundreds of years ago. He continued his slow trek across the rampart, pausing every few feet to sweep snow away from the stone.

The steady stream of enormous snowflakes gave the atmosphere a sense of calm that was as devastating as it was serene. He shuddered underneath his thick fur coat. With a curse, he flipped the hood over his head—at any moment the light snow could turn into a driving blizzard. Calm weather in the Spires was always short-lived and too often followed by a fierce snowstorm.

There was work to be done regardless of the elements.

He glanced at the snow and sky for brief intervals; his gaze was locked on every inch of the snow-covered ramparts—black eyes darted, looking for cracks or fissures. Giving a final grunt of satisfaction, he walked swiftly back to the eastern rampart and descended a stone ladder that had been set into the wall. This section, like the others, showed little sign of wear. The castle had been pounded by wind and blizzards for nine out of twelve months over the years, and yet it still showed the glow of first building. The castle had stood for hundreds of years, and he swore he could still see the marks left by the builders. Something, or someone, had worked very hard to ensure that the building remained strong. Regardless, he had to check. He descended the ladder, finally landing in the courtyard with a soft thud. Another tuft of snow rose into the icy air.

Vicki's Comments: I like the cover. It looks very other-worldly. It's well designed, and draws my attention. The only thing that makes me pause is it really looks like a sci-fi novel instead of a fantasy novel. Now, sometimes sci-fi and fantasy mingle a bit, but in reading your blurb I'm not getting a sci-fi feeling at all. I think that's a major issue. Your cover should be enticing science fiction lovers, but when they read the blurb they probably don't want to read it because they're looking for science fiction. I would suggest re-doing the cover to catch those looking for fantasy.

The product description really needs help, in my opinion. When I pick up a book and read the description, I want a general idea of the main character and what their struggles are in the book. This description gives me several situations, but not really a plot idea or a character that I want to read more about. I'd look at getting other author's opinions on the blurb.

The first 300 words did not catch my interest. There seemed to be too much focus on the snow. There wasn't much to draw me in with the snow. The only time snow really is interesting to me is if people are stuck in a blizzard and they're going to drive off the road, freeze to death, or other such grave danger. But even then talking too much about the snow itself would take away the tension. I want to know more about the people. Which brings me to another issue. When I start reading a book, I want to know the name of the person I'm reading about. Unless there's a very good reason for withholding the name of the character, I want to know the name. (A good reason to withhold the name would be it's a mystery and the unknown character is the murderer and we can't know the name because it would give the ending away.)

I would suggest trying a different cover - one that emphasizes the fantasy genre. I would also try a different blurb. Focus more on the main character. I'd also get some advice on starting the book with a hook. It could be as easy as trimming off the first few paragraphs.

What do you guys think?
Posted by Victorine at 8:09 AM