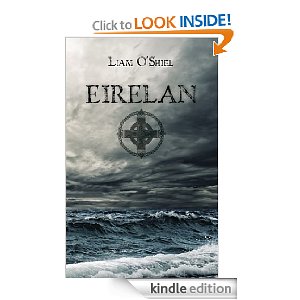 The great cities of the past have crumbled to Earth. Square-rigged warships sail the seas. Battles are fought swords and longbows and catapults. Yet culture and civilization abound: towns and villages, pubs and fairs, music and poetry, history and philosophy, are all about. It is the 999th year of the Province of the Twenty Clans, founded on the shores of Lough Ennell in Ireland in 2954 A.D. In this millennial year, the Province and its Gaelic-speaking allies are threatened with extinction by an ice age overspreading Europe and by determined, powerful enemies on land and sea. This is a story of a noble people fighting for the right to live and enjoy the beauty of the world as they see it. Book I of the Saga of the Latter-Day Celts.

(Eirelan is a 270,000 word novel. The preface is a poem by a main character; each chapter begins with an epigraph. Below you see the poem, chapter 1 epigraph, and 270 words of the first chapter of fifty.)

Strike me, ye winds of a frightful black night,
Bend, all ye boughs till your limbs touch the Earth.
Rain in great torrents, blind my pale eyes,
I fear not the rage of the storm.
Thunder, ye waves of the sea on the shore,
Crack, ye hard stones and fall into the foam.
Bolts of fierce lightning, strike where ye will,
I stand on the edge of the cliff.
Howl on, ye wolves of the forest together,
Rend the night’s calm with your heart-chilling song.
Shriek, ye great owl, and hunt as you will,
I stride through the deep woods alone.
Touch me, sweet dawn with your rain-scented mist,
Call to me, larks and ye sea-hunting birds.
Zephyr of morning, caress my fair hair,
I rejoice to be part of it all.

On the shores of Lough Ennell, toward early evening on the winter solstice, in the old calendar year 2954 A.D., the Twenty Clans gathered, not all of the people to be sure, but the leaders and elders and scholars and the ordinary folk who farmed and fished and made things with their skilled hands. As the sun set over the lake, a solemn song was sung while twenty great stones were set in a circle, one for each clan. This circle of stones was ever after venerated as marking the time and place of our joining together, to live as we wished to live, speaking the ancient tongue of the Celts, and forsaking forever after the machines which had brought mankind low and torn the beautiful earth asunder. On that day near a thousand years ago at Lough Ennell, we became the Province of the Twenty Clans.

Seanlaoch Osraige, Historian of the Province

The Harvest Fair at Wicklow was by no means the largest in the Province, yet no other fair east or west surpassed the joy of its music, the riot of its colors, the variety of its foods and ales, and the artistry of its crafts. Today the fair had been blessed with a balmy early autumn day of gentle sun and cool breeze from the sea.

People came from as far as Ballycanew to the south and Athy to the west, in creaking, thick-axled farm wagons drawn by snorting teams, bearing fathers and mothers and infants on the buckboard and the older children crowded in amid tubs of grain, strings of cured sausages, wheels of aged cheese, crocks overtopped with fresh butter, kegs of strong ale, boxes of potatoes and tomatoes and carrots, cartons of herbs for curing and herbs for cooking, and every other item large and small that might be bartered or sold for Province coin.

In smaller wagons or on horseback came the vendors of fine metalwork, jewelry, pottery, glassware, clothing for every purpose, shoes, caps, hats, tools, cookware, wood carvings, paintings, wall coverings, carpets, weapons, and armor. Musicians, drama troupes, storytellers, mystics, bards and singers had been working the rolling fields since dawn, their cups and baskets filling fast with coin. The innocent laughter of children mingled with shouts of greeting, the banter of bartering, guffaws at a joke, the sweet lilt of a fine soprano lifted in song. Clans scattered over the land gathered to exchange the news of births and deaths and weddings and seamy tales of family intrigue, jealousy and secret grudges.

Vicki's Comments: When I look at this cover, I like the overall design, but I don't get any sense of genre from it. The ocean could mean this is a nautical book, but there's no boat or person to look at. I like the Celtic symbol, but it makes me think the book is historical. I think the cover isn't helping draw readers who like futuristic stories. I would try to get a different cover design, one that tells the reader at a glance that this book is set in the future. Is this book dystopian? Maybe look at other dystopian books and try to get that kind of a look. Most of them have futuristic type styles, which can tell the reader right away this is not a historical novel.

I don't usually pick at titles, but I'm not sure the title of this book is helping it any. The title makes me think of High Fantasy, set in the past. This is compounded by the cover, in my opinion. I don't think these things are drawing in the right audience. I hate suggesting a title change, but I think I'm going to at least suggest you look at this as an option.

There's a big problem with the description. There are no characters in the description. Who is this book about? What are their struggles? What obstacles do they overcome? I don't usually want to read a book unless I know what the main character's name is, and why they are someone I'm going to want to spend hours of my time with. The main obstacle is not getting people to part with their $1.99. It's convincing people they want to commit a large portion of time to read this book. In my opinion the description needs to start with the main character, what event starts the book in motion, and what conflict keeps me glued to the novel until the end.

I normally cut the beginning to be 300 words when an author sends me more, but this time I kept it all in. I felt it was important for people to be able to critique the entire beginning, because at 300 words we haven't even gotten to the prose yet. Now, you have to realize that I'm not a huge poetry lover. When I saw the poem at the beginning, and read that each chapter starts with one, I wasn't horribly enthusiastic about it. Some other people might really like it. If people like me were the target audience, though, I would suggest cutting the poetry. The poetry could be put at the end or on the website for extra material that fans would like.

I'm confused about each chapter starting with an epigraph. Isn't that just back story that would be better coming out as the story progresses? I would suggest cutting the epigraphs too, and giving the reader the information as they read.

Now, I'm not saying everything about the book is bad. I did actually grab a sample so I could read more of the prose. In my opinion, the prose is well written. I just felt like taking a large pair of scissors and trimming out a bunch of the beginning. I want to get to know the main character first, and then learn about the setting in little bits as the scene progresses.

This novel is 270,000 words. Wow. I can't help but think that two thirds of this could be cut. (Granted, I haven't read the whole thing, but judging from the beginning, I'm guessing the whole book needs a nice trim.) I would recommend seeking a content editor or finding some really good beta readers who can help you slim down the novel. I would also get a more futuristic cover and work on the blurb.

What do you guys think?
Posted by Victorine at 12:55 PM