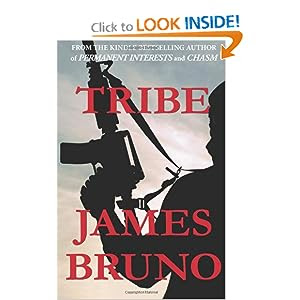 James Bruno is back in full force with Tribe. Author of the bestsellers, Permanent Interests and CHASM, he again pulls us into a world of espionage, political treachery and techno-thrills...

"Meet Harry Brennan, CIA officer and go-to guy on Afghanistan. When his mission in Afghanistan is aborted and he finds himself back in Washington, Harry starts digging until he finds out what everyone doesn't want him to know. And it comes as no surprise to Harry that it's all about money, or oil to be exact. As the Western world's need for oil increases, something must be done to break the stranglehold of the Arab world on oil supplies. A secret deal has been struck to get a U.S.-financed trans-Central Asian oil pipeline to the Arabian Sea built through Afghanistan and Pakistan. This scenario would bring Croesus-like wealth for the oil companies, back-channel cash to politicians and cement American political and economic supremacy in Central Asia at Russia's expense. It would also force the Afghan allies to share power with the Taliban so pipelines could be built and U.S. troops finally withdrawn. Harry finds himself enmeshed in the double and triple cross of the relentless Washington political machine. In a surprise turn of events, Harry finds himself branded a traitor and fleeing for his life from jihadists in Afghanistan and Predator drones in Yemen, a target of his own CIA, while trying to rescue his kidnapped daughter."

"This is a brilliant book that is well-paced and -plotted with many interesting layers." ~ Readers Favorite.

Written by a former insider and censored by the U.S. government, TRIBE resonates with authenticity rarely seen in the political thriller genre.

I used to fly into Islamabad in the dead of night, in black C-130s, the U.S. Air Force insignia miniaturized so that only eagles and Clark Kent could make them out. The Paks wanted it that way. The idea was to keep the American government’s role in supporting the Afghan mujahidin as invisible as possible. After all, our cargoes were lethal. Yet, Allah forbid, should one crash or be shot down with by an SA-7 or, worse, one of our own Stingers, we could claim the marked aircraft was not on a spy mission. Another kind of plausible deniability. Covert guile. Cold War.
Now, CIA personnel fly into the Pakistani capital on commercial aircraft in bright daylight, irrespective of whether we’re under cover or not. Islamabad International Airport is like a tiny patch of unblemished skin on the otherwise pocked face of an impoverished country. Modern, spiffy, efficient. Much like Islamabad itself, an artificial new city which belies the hand-to-mouth existence of 172 million people.

I pass quickly through immigration and customs with my black diplomatic passport in hand – in my real name. Two people await me past the customs posts: a white face and a brown one. The former is a junior officer from Islamabad station; the latter a Pak intel agent whose excessive efforts to make himself inconspicuous have the opposite effect. His task is to follow me.

“Larry O’Connor,” the junior officer says as he offers his hand. This blond, clean-cut, horn-rim-spectacled generation-Y-er looks like he just stepped out of the Harvard MBA program – except that Harvard MBAs shun the CIA. He has been here a while, judging by his combination Indiana Jones bush jacket and caftan trousers.

After, “How was your flight?” “The weather is hell here now,” the usual banter, Larry’s face darkens. “It’s hard to operate in this place, do anything here,” he says with a gesture toward the pick-up with two armed Pak guards that leads our vehicle, itself a fully armored Toyota Landcruiser with inch-thick bullet-proof windows.

Sabrina's Comments:
The cover is eye catching but the first thought I had after seeing it was this is a war book. I expected a controversial memoir of a soldier, not a political thriller. I scanned through the thumbnails to see your cover smaller and you can't read "Tribe". The red letters melt into the gun. The message that it's a non-fiction battlefield story, not a thriller is even stronger when shrunk. The thumbnails are typically the first impression readers have of your book. You might be losing people because they think your book covers a different subject.

The blurb starts out with "Meet the main character . . ." This didn't work for me. You didn't overcome my "who cares?" factor. I don't know why I should care about him yet, so introducing him like this feels awkward.

His mission is aborted and he starts digging why? Is the mission aborted under suspicious circumstances? What is he digging into? I assume you mean the mission went side-ways, Harry got the equivalent of a shove out of the way and now he wants to know why. How it's written, I can also read it that he's just a snoop digging where he doesn't belong.

I don't like where you started the sentence with "And". Get rid of it and the sentence is fine. The information about the oil is great. I think it's perfect for the book.

"In a surprise turn of events" This phrase is unnecessary and cliche. If it's not a surprise, it's not a thriller.

You have "finds" in two sentences in a row.
Harry finds himself enmeshed in the double and triple cross of the relentless Washington political machine. In a surprise turn of events, Harry finds himself branded a traitor and fleeing for his life from jihadists in Afghanistan and Predator drones in Yemen, a target of his own CIA, while trying to rescue his kidnapped daughter.

I would word it something like:
Harry finds himself enmeshed in the double and triple crosses of the relentless Washington political machine. (Someone) brands him a traitor and he must flee for his life from jihadists in Afghanistan and Predator drones in Yemen. With the CIA's target on his back, his new mission is to rescue his kidnapped daughter at all costs. <- I want to work in the title at the end of this sentence somehow (instead of "at all costs" which is rather cliche as well) but I'm not sure how Tribe associates with the book and why it is the best title for the storyline.

First 300 words: "I used to fly into Islamabad in the dead of night" -You have my attention.
"in black C-130s" -I'm still with you for the description.
"the U.S. Air Force insignia miniaturized so that only eagles and Clark Kent could make them out" -I don't know why the insignia takes over as the subject of the sentence. You're in first person so the speaker is my focus, not a picture. I like the visual you are trying to make but not the execution.

From the book description, I thought the first paragraph was telling us about the mission that got him kicked back to America and causes him to start digging. At the start of the second paragraph I am guessing that you are talking about a decade or two before.

I love the third paragraph. Wonderful visuals! The rest of the story flows.

Over all, I know there are readers who won't buy a book in first person but I think you have a solid enough start that most people who love political thrillers would enjoy reading the book. I suggest looking at the message a reader with no knowledge of your plot line receives from the cover, study it in thumbnail size and tighten the blurb a little bit.
Posted by Sabrina Sumsion at 12:23 PM