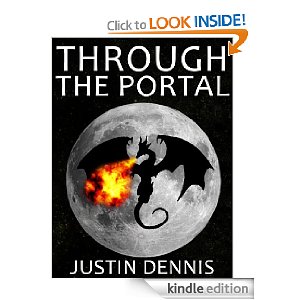 Author: Justin Dennis
Genre: YA Fantasy
How long it's been on sale: 3 Months
Current price: $.99
Marketing: Facebook, Twitter, Blog, Active on Kindleboards, sent out hundreds of emails for requests for reviews to book blogs.
Total sold so far: 17
Link to book on Amazon: Through the Portal (Book One in the Through the Portal Trilogy)

What's the worst part of falling through a portal to another world and not being able to get back? When the first person you meet almost gets you killed by a ferocious, fire-breathing dragon. Luckily, Jem and Oliver, two boys who were about to start their first year in high school, are saved by Sierra, a farm girl who is itching to get out of her small town. Together, the three of them set off on a quest to defeat the evil Veroci Regime that is stealing all the magic from the world, but can they do it before the Dragon catches up with them?

Through the Portal is the first book in a planned trilogy.
Approx. 104,000 words

Jem wasn’t the type of kid who went on adventures; Oliver was. And as they sat in their last day of summer school, on a blazing hot mid-August day, Oliver was dreaming up what he thought would be his best adventure yet. It was one o’clock in the afternoon… that meant that in twelve hours he could start his plan, after everyone was sound asleep… yeah!  This was going to work… he just had to—

“Oliver!” called the teacher, a small, chubby man who was sweating profusely in his striped dress shirt with the sleeves rolled up. “Would you like to answer the question?”

Oliver snapped out of his daydream. “Uh, not really…” he muttered under his breath.

“What was that?” asked the teacher.

“Yeah, sure,” sputtered Oliver, fumbling randomly with the papers on his desk. “What’s the question?”

Snickering broke out across the crowded classroom—apparently everyone found it funny that he hadn’t even heard the question. That is ... everyone except for the boy who was a row to Oliver’s left, and three rows closer to the front. That was Jem, and he wasn’t about to laugh at Oliver.

“The question, Mr. Pautelle, was: On what date did Benito Mussolini die?”

“Benito Mussolini…” said Oliver, looking everywhere but at the teacher. “That was the Italian Hitler, right?”

This got a couple of laughs throughout the classroom.

“If you must be crude about it,” replied the teacher, obviously running out of patience. “He was the Fascist leader of Italy during World War Two, and his country was allied with Hitler’s Nazi Germany.”

“Right, right…” said Oliver, now looking at Jem for help, but he hadn’t even turned around. “So no funny-lookin’ square moustache?”

Then his eye caught the bottom of Jem’s shoe, which was visible since Jem had his right foot slightly out to the side and was on his toes. Sharpie was roughly scribbled over the white rubber bottom of his shoe: 28 APR 45.

Vicki's Comments: My first thought after looking at the cover was, "What? Dragons in space?" An interesting concept but I'm guessing that's not really what the book is about. I think there is some genre confusion on the cover. I see that it's listed as a fantasy novel. Most fantasy novels don't have a space shot on the front. I would definitely rework the cover image. Having a dragon on the cover is great, but I would not put him in space, that gives the reader a Science Fiction feeling. And with both you're probably turning away Sci-fi fans who don't particularly want to read about dragons, and turning away Fantasy fans who don't particularly want to read about outer space.

The description is okay, but kind of generic. I've read a lot of fantasy blurbs about young people going on quests to save the world from some evil person destroying that world. I would like to know what's different about this book. I don't think it would take much to spice it up a bit.

I liked the beginning of the book. My only complaint? There seem to be a lot of…periods of…ellipsis. In the first 300 words there are 7 of them. That's one every 42 words. If they're that rampant in the rest of the book I'd stop reading, it would drive me crazy. That's my only complaint, and I readily admit it's a nit pick.

I think a new cover and blurb would really help this book. What do you guys think?
Posted by Victorine at 7:10 PM