Volumes of the Silver Leaf 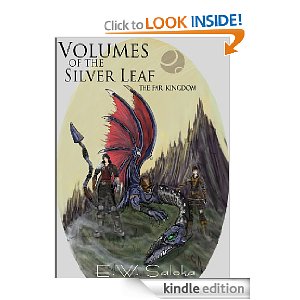 Author: E.W. Saloka
Genre: YA Fantasy
How long it's been on sale: 8/2011
Current price: $2.99
Marketing:The first two months I read posts from KB and other forums. Last moth I set up our author profile on Goodreads and  joined a few groups. I found a few book blogs and set up twitter and facebook profiles.
Total sold so far: Less than 10
Link to book on Amazon: Volumes of the Silver Leaf

Fifteen-year-old Zach Wellington has lived with his grandfather Thomas since his archaeologist father disappeared years before. Now his dad has turned up dead. A letter in his pocket says he was trapped all these years in a parallel world where magic is real--hard for Zach to believe, until a winged horse appears out of nowhere and whisks both Wellingtons away to Brandiss-Dor, the land where Zach's father died.

Zach wants to discover who murdered his father. Instead, he's pulled into a tug of war between wizards over a powerful medallion that will decide the fate of two worlds: Brandiss-Dor, and our own.

"The Far Kingdom" is the first volume of the new epic fantasy series "Volumes of the Silver Leaf."

The sky was darkening and the clouds looked angry as they changed to deep and soulless gray.  Thunderous hoof beats echoed towards him as he raced through the forest. He was soaked down to his skin, first from sweat and then from the heavy rain which came at him in torrential sheets. The ground was thick with mud, and he almost slid into it waist deep. There was a ringing sound of clanking metal and shouts heard throughout, as he tried to stay one-step ahead of his pursuers. They were close on his heels and determined to cut him down. It had been apparent from the past months that his life was in danger. He really could not say why.

However the witch of Blackshire warned him and the wizard too, advising him to leave this place and soon. Those awful recurring dreams that kept him tormented in his sleeping hours and avoiding his would -be assassins in the waking hours, well ,it just kept him busy trying to stay alive. Several months ago, he found a tunnel, a passage hall, to pass from one realm into another. This would lead him back home and that simply was the only way. On one occasion he found the entrance and it slowly opened up, however when he moved towards it the boy had followed him. When he turned, it closed up and vanished.

Therefore, each time he tried, someone or something would stop him. Philip Wellington was determined the next time he would make it through and finally leave.

He stopped quickly, seeing several large rocks that would be easy to crawl into and take cover. Here he would secure a place to hide, if only for a little while. At least he could stay dry he thought. He felt bad wanting to leave the child behind, but was eager to go home. It had been too long already and he grew more anxious each passing day. He sometimes wished he could take the boy back with him; however, it was best this way. Someday he hoped the child would understand.

Vicki's Comments: I like the cover, but I think it can be improved. The people blend into the background, I had to look hard to figure out what exactly was depicted in the scene. I think the typography could be improved as well. The words don't seem to stand out as much as I usually see. I do think the cover gives me a "fantasy" feeling, so that's good. Showing the genre is very important on the cover.

I like the description. I might be a bit more specific at the end, what exactly are the stakes? A tug-of-war isn't very compelling. I'd like to know what might happen to our world, and what the MC can do about it.

After reading the first 300 words, I would suggest putting the novel through a critique group. The story itself is good, but some of the wording is confusing and clunky, and I think it would greatly benefit from a critique group. I also found mistakes that could be fixed by hiring an editor, such as "would -be assassins" and "well ,it just kept."

I did get curious about a few of the things I saw, so I downloaded a sample to my kindle. The book itself is rife with formatting errors. I would highly suggest hiring someone to help format the book. There are paragraphs with two spaces in between, followed by multiple paragraphs smashed together without any spaces. There are no indents, so it's hard to read without spaces between paragraphs. There are some strange things, like in the first sentence part of the word 'looked' is bold. This book is in desperate need of formatting help.

I would run the book through a critique group or find a few beta readers, hire an editor, and tweak the cover to see more sales. What do you guys think?
Posted by Victorine at 10:11 PM