The New Death and others 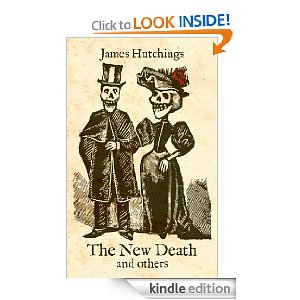 Author: James Hutchings
Genre: Fantasy
How long it's been on sale: September 27 2011
Current price: $.99
Marketing: I've contacted around 1000 blogs asking for reviews, interviews, guest posts and/or giveaways. I've also promoted it on my own blog.
Total sold so far: 24
Link to book on Amazon: The New Death and others

Death gets a roommate...

44 stories. 19 poems. No sparkly vampires. There's a thin line between genius and insanity, and James Hutchings has just crossed it - but from which direction?

The God of the Poor

In the beginning of the world the gods considered all those things which did not have their own gods, to decide who would have responsibility and rulership.
"I will rule all flowers that are sky-blue in colour," said the Sky-Father.
"I will listen to the prayers of migratory birds, and you all other birds," the goddess Travel said to him. And so it went.
At last all had been divided, save for one thing.
"Who," asked the Sky-Father, "shall have dominion over the poor?"
There was an awkward silence, until the Sky-Father said,
"Come - someone must. Those with no gods will grow restless and cunning, and in time will cast us down, and we shall be gods no more."
"Not I," said blind Justice, and her stony face flashed a momentary smirk at the thought. "Why not Fame or Fortune?"
"Darling I don't think so," said the sister goddesses together.
There was a long pause. The gods shuffled their feet and avoided one another's gaze. At last a voice broke the silence.
"I will," said Death.


How the Isle of Cats Got Its Name

Death stalked the cats of Telelee.
Throughout the city there was much hiding under couches, and a yowling fear of shadows who came in the night. These shadows gathered squint-eyed kittens and cats trembling with age. Starving alley cats like leather bags filled with bones and pampered house-cats more spherical than cat-shaped, alike were taken. The shadows asked not whether a cat was tom or queen. White cats and black, tabby and orange, grey and tortoiseshell, cats that looked like their owners and cats that looked like nothing but cats, the shadows hungered for all.

Vicki's Comments: I like the cover art. I do. But I like ink drawings from the early 1900's, and this is what this book cover art reminds me of. The style makes me think this was public domain art that the author took and used for cover art. Which is great if the book was written in the early 1900's. But not so good if you're trying to sell it to people looking for new stuff. I usually advise people to stay away from public domain art. It makes people think they are looking at something written a long time ago. I would highly recommend getting a new cover.

The description is pretty anemic, however I like the end paragraph. I'd keep that. The short descriptions of the stories don't hook me. I would get help reworking those hooks, because you want those bits to really make the reader want to buy the book. You want to give enough information about the stories that the reader knows what they are getting. Death getting a roommate isn't a story. What's the hook? Where's the conflict? Is the story humorous? I want to know these things before investing my time. (Because, I throw away 99 cents all the time on crap. It's my time that really is more precious to me.)

After reading the sample, I think this collection should be selling better than it is. I liked the quirky nature of the writing. I do think this book needs some editing. For instance: "Starving alley cats like leather bags filled with bones and pampered house-cats more spherical than cat-shaped, alike were taken." This sentence reads like the leather bags were filled with bones and pampered house-cats.

The title could use some tweaking. It could be a regional thing, but I would expect to read: The New Death and Other Stories.

I would suggest a new cover, reworking the blurb, and having an editor correct the little things in the book. Now, short stories and poems don't sell like best sellers, but I do think this book should be selling better than it is. The writing is good and the ideas in the book are interesting, at least in my opinion. In fact, I just bought a copy because I want to read more. What do you guys think?
Posted by Victorine at 1:23 PM