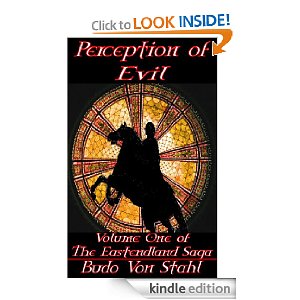 Unexpectedly turned out of his home by his aged master, armed with little but an insatiable curiosity, a vast education, and a marvelous sword, Valkane the apprentice sets out in search of many things, among them his ancestry, the meaning of a vision, and knowledge. He stands a good chance of finding all of this and more, if he somehow manages to survive. His journey brings him into contact with Elves, Dwarves, monsters, evil magicians, howling Barbarians, and more. With a penchant for getting lost, he finds himself caught in the middle of innumerable plots, secret locations, and possible war. The greatest danger he will face, however, is the mysterious pursuit by The Hand of Doom. Join him and experience these many things with him, meet his friends, and share his...doom?

Though hours remained before dawn on this cool, rainy spring morning, Valkane could not sleep.  In truth, he had not slept well for nearly a week.  He had tossed fitfully the last few nights, reliving the same dream, searching for any meaning in it, perplexed by the sense of urgency the vision left in its wake.

The dream troubling him appeared to have been triggered during a session with his scrying bowl.  While researching some interesting events of the distant past (his favorite subject), he had come upon an image of a large, black-clad man sitting on a great throne in a dark, dank room.  Valkane had absolutely no knowledge of who this man was or what he was doing, or even why he should appear in the place Valkane was examining.  The dark man’s attendants were as intriguing as the man himself; actually, even more so.

Just as Valkane was beginning to admire these attendants closely, he became aware that the figure on the throne was aware of him.  Horrified, Valkane had wrenched himself away from his bowl to discover he was breathing hard and had an awful headache.  By all of the laws of nature, science, and magic, what had transpired that day was impossible.  Not even a friend on the other side of the same table would be aware of a scrying session, to say nothing of a long-dead stranger.

That very night was when this recurring nightmare had begun.  In this vision, Valkane sees himself in the lab, bent over the scrying bowl again.  Looking over his own shoulder, so to speak, he sees himself in the bowl, walking through a twilight mist, as if strolling along the edge of a marsh at moonrise.  No sound or color comes to him at this point, only white mist, black sky, and pale light.

Vicki's Comments: The cover doesn't say "High Fantasy" to me. In fact, the background looked like a stained glass window at first glance. The font didn't look professional, which gave the entire cover an unprofessional look. I would suggest a re-design of the cover. Maybe check out some other covers in the high fantasy genre and see which ones catch your eye, then try to put into words what you like about it.

The blurb isn't specific enough for me. It could be any number of novels where the protagonist goes in search of something. I want to know why this book is the one I should be reading, instead of hundreds of other novels that have a main character going on a journey. I would re-work the blurb as well, trying to be more specific to the protagonist and plot of this novel.

The novel starts with narrative summery instead of a scene. I think this is hurting your book. I also found a few awkward sentences, like: he became aware that the figure on the throne was aware of him. And some tense issues. I would join a critique group to polish up the piece, or at least run the first chapter through critiquecircle.com to get some outside eyes on the prose. The beginning is often the hardest part to get just right.

What do you guys think?
Posted by Victorine at 9:44 AM