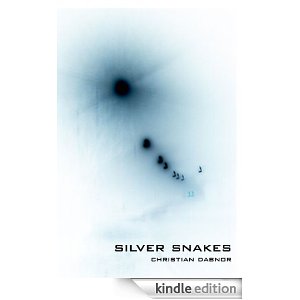 Author: Christian Dabnor
Genre: Short Story, including sci-fi, satire and drama
How long it's been on sale: 4 Days (It's been about a month now, but 4 days when submitted)
Current price: $.99
Marketing: Twitter and Facebook, Goodreads, designing an email signature (see below), leaving flyers in pubs, my blog, changing signatures on forums, and two review websites.
Total sold so far: 7
Link to book on Amazon: Silver Snakes

Silver Snakes is an anthology of four short stories by Christian Dabnor:

Silver Snakes, a slipstream love story, appears in three distinct narrative forms, each exploring the key theme of the story - memory.
Captain Smith and the Numbers Game - The marketing department are unsatisfied with sales of ace fighter pilot Captain Smith's merchandise and take drastic action.
The Folly - A shy, unextraordinary woman finds herself unexpectedly the focus of a charming young man, who extends to her a terrifying, but inevitable sounding proposition.
The Expendable Mr.Skimble - Unknowingly, Mr.Skimble has been living a lie, victim of a gross, and politically embarassing, bureaucratic error.

I follow one of the droplets of rain as it traces its shaky silver serpentine path across the carriage window to where it disappears into the flickering pool at the rubber seal.  As the train draws to a halt, the remaining droplets cease their horizontal journey and slide downwards.  With a pneumatic hiss, the doors open.  I look towards the door and that’s when I see her.  Her brown hair frames a sylvan, unblemished face.  As she walks towards where I sit, I look at the other seats, hoping that they are all taken.  They are.  As she sits next to me, she brushes her hair behind her ear with long delicate fingers and smiles, her eyes closing momentarily.  It seems as if she slips, for the briefest time, into slow motion.  I don’t notice the train starting again.

She points at the wriggling droplets of rain and tells me that they look like silver snakes.

I smile because I think they look like silver snakes too.

She introduces herself with a shrug and a tilt of her head.  Her name is Emma and she is returning to the city from seeing her parents.  It’s something she does daily.  I find myself telling her things that I’ve never told anyone else.  It feels comfortable... natural, like I’ve known her for an age.

She gestures at a man sitting down the carriage and proposes a bet.  If he gets off before the terminus, she tells me I have to buy her dinner.  I ask her what I get if I win.  With a grin she tells me we each buy our own – her company will be enough of a prize.  I can tell that this confidence is not natural to her, that it is a joke on her part, but she’s right.

Vicki's Comments: I think the cover needs some work. Is that DNA on the cover? I wasn't sure, and if I'm not sure, you can bet others aren't sure what they're looking at either. I think the type on the book is too small and there's nothing to indicate it's a short story collection. I'd love for it to say "Silver Snake and Other Stories" or something like that. If it were me, I would pick a different image. I think there's too much white space that the cover just disappears into the background.

The descriptions of each story don't draw me in, probably because they are too vague. What merchandise is the Captain selling? What drastic measures do they take? What is the proposition the man gives the woman? What error are you talking about? The questions I'm left with don't make me want to buy the book to find out. They are key in helping me decide if these stories are going to be worth me spending my time and money on. (And really, 99 cents is nothing, so I want to know if my time is going to be well-spent more than my money.)

The writing could use some polishing up too, in my opinion. I'd much rather read a conversation than be told about it. There's no dialogue at all in this snip, and yet I'm being told about what was being said. I feel very distanced from these characters, in a bad way. But I think the author has talent, and with the help from a critique group I think this can be greatly improved.

What do you guys think?
Posted by Victorine at 4:08 PM