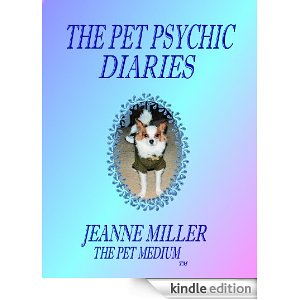 Read about Moosie, the horse who hated his name.
Zak, the kitty who was being terrorized by a Civil War ghost.
Krebs, the blackmailing Sun Conure.
Mariah Bayou, a rescued Raccoon and so many more.

These readings with our furred and feathered friends illustrate what we have long suspected; Animals have rich and emotional lives that are much like our own. After reading this book, you will never look at your pet in the same way again.

The dream was a pleasant one.  I was sitting on a red and white checkered picnic blanket which rested on a vibrant green hillside.   I seemed to be having some kind of tea party as I saw toy cups and dishes set out along the sides of the blanket.  I looked up and to my delight and surprise; all of my guests were animals.  Dogs and cats all sat comfortably in place looking expectantly at me.  I caught a movement to my left and saw my cat Jessie escorting an orange striped cat up the hill to the blanket.  Leaving the cat, Jessie turned and started walking back down the hill.  I called out to her and said, “Jessie, come back and sit with us.”  She looked at back at me and said: “No.  It is my job to bring the animals to you.”


My cat Jessie was eighteen years old at the time of this dream and was close to transitioning.  From the moment I got her as a kitten, there was an incredibly strong bond between us.  She followed me everywhere I went and hardly ever let me out of her sight.  The thought of her not being by my side was a heartbreak that I knew I couldn’t stop from happening.  I had just recently lost my brother who had passed over unexpectedly and was still reeling from the shock of it. A few months later, my beautiful Jessie passed on and within a year after that loss, my mother became ill and she also passed.  She was my best friend.  To say I was inconsolable is a vast understatement.   All of these losses coming so closely together left me hollow inside.  I was empty and spent most of my days sleepwalking through a life that had become unbearably painful.

Vicki's Comments: First, the cover. I think it can be improved. I like the pretty colors, but it doesn't look like a professional book cover to me. I think the rainbow color scheme is what is holding it back the most. I went to Amazon and searched "memoir" just to get a feel for some of the other book covers out there. My favorites were full photographs with type on top. I think this could be done nicely with the photo of an animal. It might be fun to play with making the photograph a negative image, or black and white, to represent the paranormal aspect. I'm not a fan of the font used either, but that's an easy fix.

The description is all right, but I think it could have a bit more punch. It seems to take the emotion out of it, and from the reviews I gather the book evokes a lot of emotion in the readers who have enjoyed it. I would try to see if I could evoke some of that emotion in the description.

The first 300 words were interesting to me, but I felt as if it could be improved. The dream didn't seem to have a lot to do with the next paragraph, which was about loss. (Maybe the dream does get tied in later, and I just didn't get that far.) But I'm not sure if starting with a dream has the impact it should. In fiction, starting with a dream is very cliched. I don't know if it works here either. I also found a few errors and would suggest an editor.

Now, after saying all of that, I think the target audience for this book is very niche. It's going to be a harder book to sell just because the audience is going to be smaller. I probably would suggest visiting blogs dealing with mediums and pet ownership and get to know the people who would be most interested in this subject matter.

What do you guys think?
Posted by Victorine at 1:46 PM