Not Everything Brainless is Dead 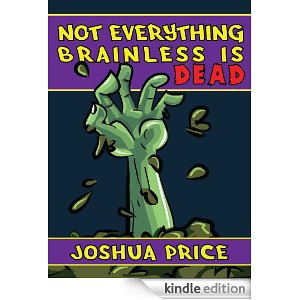 Author: Joshua Price
Genre: Comedy
How long it's been on sale: Feb 28, 2011
Current price: $.99
Total sold so far: 60
Link to book on Amazon: Not Everything Brainless is Dead (Book One of The Absurd Misadventures of Captain Rescue)

When Captain Rescue's city is overrun by man-eating zombies, he and his arch nemesis must band together to thwart mankind's undealiest threat!

The adventure begins after Dr. Malevolent knocks off the most prominent bank in the city. The super villain gets far more than she bargained for, and over the course of the ensuing shenanigans, zombies are inadvertently unleashed. The outbreak spreads like crazy, and arch enemies embark on a journey to discover who, in this universe or the next, would commit such a dastardly act.

Will Captain Rescue and Dr. Malevolent find a way to put a stop to this apocalypse, or will the undead eat them alive?

"Not Everything Brainless is Dead" is the hilarious entry to Captain Rescue's absurd misadventures, and the first book of a series that is meant to feel like a novelized comic book. A second adventure, "Past, Future, & Present Danger", is also available.

Recommended for fans of humor and the literary stylings of the late, great Douglas Adams as well as the great, but not late, Terry Pratchett.

Mostly recently updated 5/24/11. A butt load of grammatical issues and typos have been squashed!

The only thing standing between Dr. Malevolent and her salary was the large brick wall of the bank that held it. This bank, however, went by quite the ostentatious name: The Bank. Despite such an intimidating title, it was nothing more than a clever marketing ploy—one that worked perfectly. Everyone and their mothers flocked to The Bank. Regular Joes put their money in while criminals took it right back out. In retrospect, the founders would have had better luck naming their bank Cletus’s Farm Depot, but then of course nobody but hillbillies would flock to it.


The story of how The Bank got its name was one of adventure and deceit. Before settling on its current and exceedingly successful moniker, much deliberation transpired of possible other names. To settle this deadlock, board members submitted their suggestions so everyone could vote on it. Dozens upon dozens of names found their way into the top hat and most of which were quite terrible. After a lengthy process, they had their winner. Shortly thereafter, they threw the winner out and The Bank was chosen. The other suggestions, like making the B backwards or stylizing the name like Banque or Baynk, were collectively deemed lame; not a term the well-dressed businessmen used lightly.


That, among many other reasons, was why Dr. Malevolent chose to knock off this bank, but it was not just a heist with the sole goal of getting rich. She did have her own criminal organization to manage. One that employed dozens of hardened criminals, liars, cheats, and a few flat out crazies. That money had a noble purpose. As everyone knew, all major criminals needed to eat; pay their employees; take their dog to the vet when he eats those things he shouldn’t; spend ridiculous amounts of money trying to figure out how to blow up the world; replace all their DVDs with their Blu-ray counterparts; so on, and so forth. She had to make ends meet somehow. Sure, that meant sometimes robbing banks or ripping candy from the hands of shrieking babies, but that was just how these things worked.

Vicki's Comments: I really like the cover. I think the graphics are top notch and the design catches your attention. My only concern is the cover doesn't exactly say 'comedy' to me, but it does have that graphic novel feeling. For now, I wouldn't change the cover, but if a lot of advertising doesn't get this book off the ground I would go ahead and look for a different image.

The description could use some work, in my opinion. I got a bit confused when the bank was mentioned. What does knocking off a bank have to do with zombies? I might focus more on the comedy of the piece in the description. Also, I don't think I would mention you've had some editing errors in past versions. That didn't give me much confidence in the book. I'd rather have you give away some copies to get more current reviews that (hopefully) don't mention the grammatical errors.

The sample was pretty good, I found some things humorous, although the subject matter doesn't appeal to me. I'm guessing your target audience is going to be young, which might be hindering your sales.

Overall, I think tweaking the blurb will help the most. And getting some buzz going about the book, maybe with sending it to some book bloggers.

What do you guys think?
Posted by Victorine at 8:41 AM

Email ThisBlogThis!Share to TwitterShare to FacebookShare to Pinterest
Labels: Comedy