The Misguided Souls of Magnolia Springs 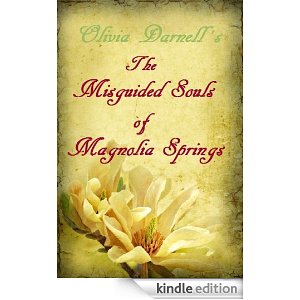 Author: Olivia Darnell
Genre: Paranormal Romance/Fantasy
How long it's been on sale: 2 years
Current price: $.99
Marketing: Facebook and Kindleboards a little
Total sold so far: about 400
Link to book on Amazon: The Misguided Souls of Magnolia Springs (Volume 1)

A small town in Southeast Texas undergoes a remarkable series of changes when a couple of out-of-towners move in and open a tea shop in a rundown building. Everyone in Magnolia Springs is soon abuzz about the proprietors of the New Castle Gift Shop as it becomes apparent that something is unsettling about Mr. and Mrs. Aliger. A power company lineman, a police sergeant and a number of otherwise mild-mannered, country-fried characters try their hands at interpreting the strange actions and unusual behavior of their new neighbors.

Things become curiouser and curiouser as the Aligers set up shop and begin making their rounds amongst the locals. Just why have they come to Magnolia Springs and what is on their hidden agenda? Could it be that the fate of the entire world might lie in the hands of a few unsuspecting souls in a sleepy little Texas Town?

“You are a hateful bitch, Mary McDaniels. From now on, when I see you in town, I’m going to cross the street to keep from speaking to you!”

A loud clunk indicated that the conversation, if it could be called that, had ended. The hum of the dial tone affirmed the fact. Mary Catherine McDaniels had never been so insulted in her entire life. She held the heavy, black receiver out in front of her, frowning at it as if the instrument itself had turned on her. She gently placed the offending item on the cradle of the antiquated phone, pushed her gold-rimmed glasses up a long nose and raised both white brows in consternation.

“Hmmmph!”  She grumped and pursed her puckered, pink lips and drew in a deep breath, placing one hand over her rapidly beating heart.

“Who was that?” her nephew, Tyler McDaniels, asked from his perch on the edge of her green Formica dinette table. He had just finished pouring up two cups of steaming water from a white porcelain teakettle.

Aunt Mary took on her favorite long-suffering expression as she perused his face momentarily before answering.

“Mildred Morris,” she spoke the name as if it would cause her to have to soak her dentures an extra hour just for having said it aloud.

“Again?” Tyler asked and turned to begin unwrapping the Earl Grey tea bags. He placed one in each cup, dunking them until they sank to the bottom amid brown swirls.

“Same old story, huh?” Tyler asked and pushed one of the cups across the table in front of her as she lowered her fragile body into one of the heavy chrome chairs.

“The very same.” She toyed with the little paper tag on the tea bag, raising and lowering the tea leaves in the hot water absently as she stared out the window.

Vicki's Comments: The cover is definitely giving me a different message than it should. I don't get Paranormal Romance or Fantasy from it at all. The title doesn't even suggest the genre, which might be part of the problem as well. I would suggest a redesign of the cover and a possible revisit on the title. I know it's kind of messy to change the title after it's been out for so long, but Lee Goldberg did it on several of his books and the sales improved quite a bit. (Heck, if Lee can do it, that pretty much gives us all a free pass to, right?)

The description did make me wonder what the book is about, but not in the way it should. Right now I wouldn't buy it because I don't know enough about the characters or what they are doing. I know something isn't right about the Aligers, but I would like to know more before investing in the time to read the book. What strange actions? Are they preforming magic? Are they trolls? What is up with them? And if this is a romance, I don't get any sense of it at all in the blurb. A romance between who? What's the conflict in the romance? If the romance isn't central to the plot don't market the book as a paranormal romance.

I could see some areas in the writing where it could be tightened up just a bit. The point of view strayed a bit here and there, and personally I like a story to have a firm point of view character. I also felt like some of the details could be trimmed down a little. All in all I don't see a huge problem with the writing.

I'm guessing the major issue here is the cover art. I would also suggest a different font. With a different cover I think this book could do very well.

What do you guys think?
Posted by Victorine at 7:32 PM