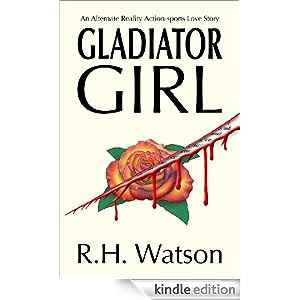 Lucy Star is a hot, up and coming rookie guardian in the sport of Blood Battle. A sport built around a new genetic procedure that allows girls, and only girls, to survive extraordinary injuries up until the age of 25, when they stop growing.

Her budding fame catches the eye of Jayzen, favored son of the wealthiest family in the city, entangling her in his and his sister Francine’s fortunes. She struggles with career and relationships, and doesn’t recognize the spark of love growing under her nose.

But she has a dark past: a family history and childhood she had escaped from when she was 14. With the help of her best friend Charlotte—the only person who ever knew her secret—she had successfully put that life behind her. It was all but forgotten.

Then her younger brother, who she hadn’t seen since he was 10 years old, walks back into her life, harboring a dark secret of his own, one that threatens to suck her into the past she thought she had escaped, and destroy her and everyone she loves.

There were thirty-seven buns in the oven and one was about ready to drop. Mary sat at the console in the Monitor Room. She pulled a card from her deck and was making a play when the birth alarm went off. The monitor showed that the womb with the bun named Lucy Star had broken its water and was chugging away with contractions. The girl’s head was emerging.

A gurney was parked outside the Monitor Room that Mary had prepared when she came on duty for the night shift. She picked up the big, fluffy towel from its mattress and hung it around her neck. Vesper, one of her matron’s aids, came out of the Recovery Ward. “I got it,” she said to Mary and headed to the Memory Vault to collect the girl’s placenta jar. Mary pushed the gurney into the Womb Room.

Rows of bulky, mostly organic contraptions stood down both sides of the room. They were big, corpulent, fleshy things with fittings at the top to feed in nutrients. Other tubes lower in the back removed waste. In the lower front, each had a vulva big enough to pass a grown woman. About two-thirds of the way down the room, one had done just that. A limp, naked girl, wet with amniotic fluid, was lying in a soft, squishy birth basin. Her umbilical cord trailed back into the womb where her foot was caught in the birth canal.

Mary pulled the girl’s foot out, cleared her mouth, and listened to her take her first gargling breath in over two weeks. It sounded healthy.

She cut the girl’s umbilical cord, and sealed the ends, then lifted the girl onto the gurney, swaddled her in the big fluffy towel, and pressed a rubber teat into her mouth. . . .

Vicki's Comments: The premise of this book is interesting to me, and reading the first 300 words sucked me in. However, the cover is a huge turn-off to me. I'm a science fiction fan. I never would have taken a second look at this book from glancing at the cover. Why? It doesn't portray the genre at all. Maybe if I knew more about the book I could see the symbolism in the cover image, but that's not what it's there for. It's to give the reader a sense of the book at a glance. I think the cover really needs an overhaul.

The description could use some work also, but it's not bad in my opinion. I'd like to know more about the conflicts that Lucy faces in this book. Eluding to secrets is okay, but I'd like to know what they are. And how can she have secrets in her past if she was born a grown woman, as the first 300 words indicate?

And that brings me to more questions about the first 300 words. I did get confused at the "her first gargling breath in over two weeks" part. I thought she was just born. Did she live before? If this is a re-birth, I would make that a little more clear. To me, it reads as if these people were all born fully grown, and that's the science of the day. I'd also like to know more about how fully grown these people are. The description makes me think that teenagers are battling in this sport, so I would make the age of Lucy when she was born, or re-born, more clear.

Now, after nit-picking this, I will say I think the main issue is the cover. I really do like the premise of the book and from what I read the writing is tight and draws me in. I am not concerned with the price. Science fiction ebooks are priced a little on the higher end, and with a different cover I can see this book doing very well.

What do you guys think?
Posted by Victorine at 10:29 AM