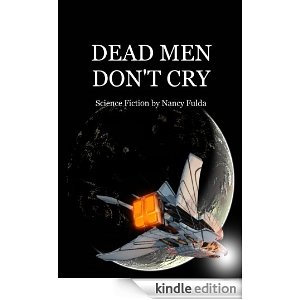 A desperate band of anti-terrorists risk their sanity to avert a catastrophe.

A mother confronts her past to save her child from aliens.

A sentient computer must choose between loyalty to humans and justice for her own kind.

From electronic ghosts to minds that travel through time, this collection is a fascinating exploration of an endless universe. Dead Men Don't Cry contains ten short stories from award winning author Nancy Fulda.

It's said that writer's stories are like a mother's children. She loves them, not merely despite their flaws, but also because of them.

Presented here is a collection of my writings over the past ten years. Within these pages you will find tales of computers that invent God, minds that travel through time, electronic ghosts, and deceased extraterrestrials. Some of these stories have received more professional acclaim than others, but in my eyes, all are beloved.

"Pastry Run" was written in a single afternoon while trailing my then-two-year-old son around the house. It was so thoroughly disliked by my critique group that I nearly shelved it. I'm now glad I didn't, because it became my second professional-level sale.

"Dead Men Don't Cry", the title story of this anthology, was written with an eye toward plot. I sought to keep the action lively and the tension high. For the most part I succeeded, but if I were rewriting it today I'd get rid of the white-room staff meeting in the opening.

"Blue Ink" was written for a high school writing contest, and won. I expanded the story a few years later. I still love it even though the subject matter is hopelessly cliche.

"Backlash" grew out of my experience watching a friend struggle with post-traumatic stress syndrome. I feel a bit sorry for everything I put Eugene through during this story. He's a good guy, and deserves better.

"Monument" may be my most jaded creation. It asks the question: "How would humanity really react to extraterrestrial visitors?"

“Tammi’s Garden” came into existence somewhat by accident.  My sister had started a writing contest and I wanted to show my support by entering a piece of fiction.  I hope no one thought the contest was rigged when the story won second place!

Vicki's Comments: I'll start with the cover. The one thing it has going for it is I could tell this was a science fiction book right away. Good job with that. The bad part is I couldn't quite tell that was a space ship at first. I thought it was some kind of mechanical bird. I also wouldn't put the focal point of the cover down so far on the book, it looks like it's falling off the page and makes me uncomfortable. If you don't change the graphic, at least move it up and over so the planet is off the page on the left side and the ship is higher up on the page. (However, I do suggest a different graphic.)

The font might be a bit plain, and the title seems to be swimming in the black. I'd increase the font size, and perhaps find a more science fiction type font.

The description didn't grab me, but I think concept of one liners that describe each story is good. It's hard to take a story and boil it down to one sentence that makes you want to read it, but I've found bouncing ideas off other authors to be helpful. I do think the blurbs can be improved.

I was disappointed that the book stared with explanation about the stories. It's interesting, so I wouldn't cut it, but I would definitely suggest putting that at the end and starting right away with the strongest story. I can't comment on the quality of the writing, since I didn't read any, but a critique group was mentioned so I'm clapping my hands. Plus Maria gave it four stars, and I trust Maria.

Overall, my final verdict for this book is tweak the cover and blurb, I think both are holding this book back. Also realize that science fiction anthology might be a harder sell than some of the more popular genres. However, I think it can do better than it has been.

What do you guys think?
Posted by Victorine at 10:05 PM