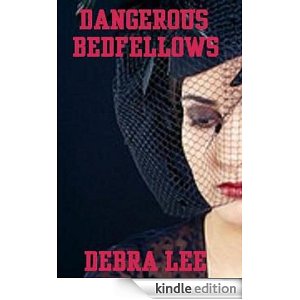 Damaged goods. That's one way to describe Jackie Bertoni. Survivor is another after the traumatic childhood she endured at the hands of her father in Italy. With the help of the American filmmaker her boyfriend sold her to for a week of sexual pleasure, she is able to fulfill her lifelong dream to escape to America. Life is good to her in the land of the free. She becomes a successful movie producer. Sixteen years slip by before the big betrayal when Jackie knows she'll never be free-never whole-able to trust another man until she gets even.

Jackie’s gaze wandered from headstones to somber faces. But not to the casket that held the body of her only true friend Desmond Sinclair. She recognized the people standing around her. Except for…

Now she knew she hadn’t worn the black net veil because it matched her black suit. She’d worn the veil to hide her eyes. She continued to stare at the man. The handsome stranger looked familiar even though she was positive she’d never met him. She searched her memory until it came to her. Andrew Michaels. His picture appeared in her Los Angeles newspaper a lot. The last time he’d posed on the courthouse steps, relief radiated from his eyes as he smiled for the cameras after achieving a guilty verdict on a high profile murder case.

How dare he show up here? Thanks to her Desmond couldn’t harm anyone anymore. A cold chill rolled through her. Perhaps the district attorney had come for her. Undecided if she should bolt or approach the man, Jackie was suddenly frozen in a time past when Marcus DeMario stepped into view.

The sight of him took her breath away just like the first time she saw him all those years ago. He stepped away from the limousine and weaved around headstones in her direction. As he neared, she saw his features had changed little. What had changed was the hardness in his composure, a coldness that sent another chill through her.

With her chin tucked into her chest, she watched him step up to the casket to pay last respects. Once or twice his steely eyes glanced her way. He showed no signs of recognizing her.

Of course he wouldn’t recognize you, she reminded herself. You were a disposable piece of property to the man.

Vicki's Comments: First, the cover. I'm not in love with it, although it's not horrible. I think what's hurting the cover is the drawing. I probably would try to find a photograph to use instead. Also, putting the victim on the cover might not be as striking as putting the antagonist. But that's just what came to mind, it's possible with the right photo you could make the woman work.

The blurb needs work also. I got a little confused and wasn't sure what the major conflict was. I think with a few tweaks it could pull the reader in more.

After reading the first 300 words I would suggest joining a critique group. www.critiquecircle.com is a great website. I think the book isn't quite ready yet. Again, with a few tweaks, I do think you can find a market for this.

What do you guys think?
Posted by Victorine at 2:29 PM