The Book of the Nine Ides 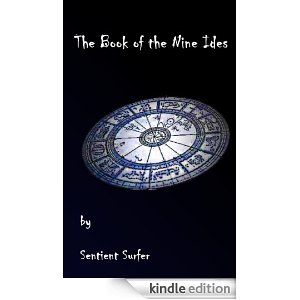 Author: Benjamin Goshko
Genre: Occult, Science Fiction, Short Story
How long it's been on sale: 1 Month
Current price: $2.99
Marketing: I have marketed the book through my twitter page, by posting links to it in author/writing related forums, and I have posted several free short stories and fan fiction novels/novellas on fanfic.net and other forums with links to my e-book. I always use the penname SentientSurfer.
Total sold so far: 12
Link to book on Amazon: The Book of the Nine Ides

After spending four years in a juvenile psychiatric facility, Ashley Minden, a sixteen-year-old gender dysphoric, has been released back into her family's custody. While the transition to home life and high school would be difficult for any teenager, Ashley has the added burden of being a conduit of Qualkhoikhom, a mad god, who gives her the eyes to see a terrifying, hidden world. Now, Ashley must either find a way to escape Qualkhoikhom and live a normal life, or succumb to her delirium, becoming the mad god's final sacrifice.

I am Ashna, final conduit of Qualkhoikhom. I feel him flow through me like water, yet I do not drown. My body shakes, vision blurring with each passing breath, and I cannot breathe. These white walls close in but cannot contain me. Nothing can contain me. When I shift, all barriers cease to be.

Ashley twitched. A muscle spasm, somewhere deep in her lower back. The impulse made her curl her toes. She placed her foot against the wall and straightened them out, feeling the cool of the concrete radiate through her sock.

A two foot long, green centipede slithered across the floor, next to her cot, shimmering. It quickly disappeared into a tiny triangular gap between the wall and the floor.
Ashley rolled over on top of her blanket, trying to find a position that would relieve her headache. Her skull throbbed with built up pressure and the sudden movement made her feel like she was about to vomit. She dry heaved. Her body tingled for a moment and then went cold.

"Minden. Number 1050." A guard peered into Ashley's cell through the narrow slot used to feed her. His voice echoed loudly in the cramped, concrete cube. "Come over and cuff up. You have a visitor."

Ashley glanced at the guard through the little door slit. Officer Cole. He was just a pair of navy blue eyes and a wiry, grey mustache. She sat up slowly, buttoned her yellow jumpsuit, and slipped on sandals. She then backed up against the door, putting both hands through the slot.

Cole fastened handcuffs around her wrists. Ashley was used to the feeling and didn't react. Once he let go, she stepped away from the door and scanned her cell. She noticed a brief flicker of movement on the floor; the feelers of the centipede. It was still hiding in the crack.

The door whined loudly as Cole pulled it open, a grating screech of metal on metal.

Ashley took a step out, onto the tier.

Vicki's Comments: There are a lot of things about this book that are confusing to me. First, the author named on Amazon is "Benjamin Goshko" but the name on the cover of the book is "Sentient Surfer." The author admits to advertising under the pen name of SentientSurfer, but since the book isn't searchable by that name on Amazon it might be confusing people. Also, I prefer pen names that read like actual names. The Sentient Surfer might be putting people off.


Second, the title confuses me. When I think of Ides, I think of The Ides of March and the ancient Roman calendar. This doesn't make me think of the occult or science fiction.


The cover isn't horrible, but it is kind of plain, and I would change the font. It's too hard to read. With the cross genre, it's going to be hard to find a graphic that suits both.


I actually liked the description. To me it gave the right amount of information with a hook to draw the reader in. I don't think I would mess with it too much, other than to reveal the word count and page count.


The writing was good. It drew me into the story and made me want to read more. I probably would cut both instances of 'loudly' but that's just the adverb Nazi in me coming out. I'm much more brutal with other people's adverbs than I am with my own. Ha.


In my opinion this book needs a lower price and a new cover. I think with those two tweaks this could do much better. I would also suggest making the author name match what's on the cover, and if at all possible use a pen name that looks like someone's real name.


What do you guys think?
Posted by Victorine at 2:35 PM