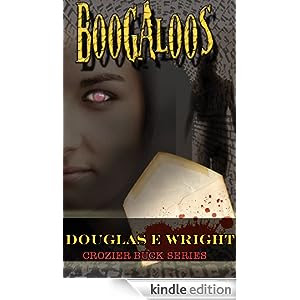 Author: Douglas E. Wright
Genre: Paranormal Suspense
How long it's been on sale: 4 Months
Current price: Free (.99 before it was free)
Total sold so far: 3 sold before it went free
Link to Amazon: Boogaloos


BOOGALOOS is a 30,000 word novella written by Canadian Supernatural Suspense author Douglas E. Wright. A writer who's style has been described as a blend of Stephen King and Dean Koontz. The first book of the 'Crozier Buck Series.'
Dead letters are not always dead . . . sometimes they kill . . .
This story is a sad, and sometimes poignant look at relationships, age, and mortality with a final horrific twist.

Postal worker Crozier Buck is suffering not only from arthritis and the threat of forced retirement, but he also lives with the memories of his wife's death from twenty-years previous.

His friend, Jerry Atkins, is concerned that Crozier won't live long if he continues to work at the post office. It's time for his friend to retire; do something different. His mind and body are far too fragile at this advanced stage.

Crozier has decided he won't retire; there's no way he's leaving the post office or Rebecca's ghostly remains behind. While he needs her memories to stay sane, he also needs the dead-letter position to prove he's not over-the-hill or out-of-date.

After discussing the dead-letter job with its retiring clerk, Crozier realizes he has an unusual gift. A talent to keep ghostly creatures at bay. And if not used properly, it could get him and others killed, in the bowels of the dead-letter office.

And, if that isn't enough, Jerry discovers that another postal clerk knows of his relationship with Crozier's wife moments before her death.

Mauve particles of electrified stardust circled the manila envelope as it hovered between the octopus-like furnace and the beamed two-by-ten ceiling.

George Androski dropped his Sam the Record Man bag onto the newly poured concrete. His third edition LP of Diamond Dogs slid into a discarded hill of dug-up slag.

He suddenly stopped dead when an abrupt noise-like the crinkling of paper-filled his ears. He swung toward his desk; his stringy black hair shifted across his face, curtaining the animated envelope as it zipped over the dingy stonewalls toward the octopus-like furnace. Out of a tunnel of sunlit dust, spiraled a period-attired apparition that wavered in front of the furnace. The translucent figure shadowed high above George's magniloquent frame before spinning toward a container of postmarked mail in a darkened corner. The creature glided to the grimy letters and parcels that lifted and heaved like burrowing mice under barn straw.

George drew a ragged breath. Paper-rot and mold filled his nostrils while a long ago postal tale made him shiver. His skin ran pale and sweat dotted his pointed cheekbones. He backed away and targeted the rickety stairway. His heart rate snapped from leisurely beats to machine-gun fire. George shook the old story out of his head and raced toward the stairs. A trail of letters exploded from the cardboard mail tray. Within seconds, they too were immersed in stardust.

Then, a weird chortle broke the cellar's musty atmosphere. With arms raised, the specter swung them as if conducting a philharmonic. The old fashioned apparition cackled hideously from George's workstation.

George halted at the bottom step while still swatting the flying envelopes. A different ghostly image appeared crumpled and bloodied at his feet. One of an old man. A dead man. A phantasmal man.

George stumbled back to the dank wall opposite the dusty staircase. Terror seized his gut as the flying envelopes escaped their sparkly sheets. George snatched the original flying manila envelope as it dove into the old man's gashes. Then as fast as the sortie had arrived, they retreated into the mist.

George fell into the wall and stared at the thick crimson liquid dripping, hollowly echoing from the crumpled old man to the floor. George nervously wiped clinging sweat beads off his stubbly chin with one hand, and clenched the blood-drenched envelope with the other. He stepped away from the wall and dropped to his knees. He peered around the corner to where the young apparition was still orchestrating his hands in magnificent swirls above his head. George shuddered as fearful tears dribbled down his cheeks. He drew a deep breath and clenched his fists. As he did so, he realized the envelope had vanished. He felt nothing and smelled nothing more than a cemetery-like basement. He suddenly realized that everything he had just experienced was now gone.

He slowly turned his head back and forth to analyze the spacious vacant room. "Yepper, pepper," he whispered. "We're all just going to have to get along."

Vicki's Comments: Okay, I realize that this book is now free on Amazon, and is ranked in the top 300 so it's obviously "selling" well right now. However, since it was for sale for four months and only sold three copies, I'm going to pretend this isn't free and give it a critique as I normally would.

Cover: I think the cover could use some work. I found it hard to figure out what I was looking at, I think the whole thing is too busy and trying to portray too much. I know this book is about a postal worker, but I wouldn't put a bloody envelope on the cover, that doesn't portray the genre to me, and that's what your cover should do. I like the face with red eyes, I might bring that into the foreground and cut some of the other stuff. The cover should say "paranormal" right off the bat.

Description: The description should not start with word count or author description. Put the word count at the end, and I would also include a page count for those who don't understand what word count means. The part about dead letters sometimes kill confuses me. I would start with the people and the conflict they face. The description shifts point of view a few times, which is fine if done right, but the way this is written just confuses me. I would try to stick with one point of view, or make it clear when switching. Also, I think there's too much in the description. I might cut some of it, make it hook the reader in and want to read more.

First 300 Words: I think the premise of the story is interesting, although I think this could be tightened up quite a bit. For me, it was immensely overwritten. When there are too many details, the readers gets bogged down. There were many redundant words and phrases that needed trimming. I think a critique group or website like critiquecircle.com would be very beneficial in helping tighten this up.

What do you guys think?
Posted by Victorine at 2:29 PM