Birth of a Unicorn and Other Stories 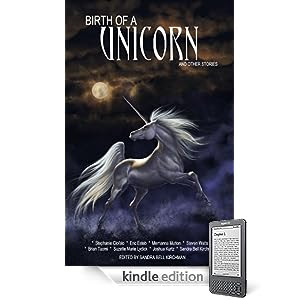 Author(s): Sandra Bell Kirchman, Stephanie Ciofalo, Steven Watts, Brian Tuomi, Suzette Lydick, Eric Esteb, Merrianna Mutton, and Joshua Kurtz
Genre: Fantasy/Anthology
How long it's been on sale: In print since August 2010 but only on Kindle since the end of May 2011
Current price: $.99
Total sold so far: 6 on Kindle. Well, 7 if you count the one that got returned...
Link to book on Amazon

 Sandra Bell Kirchman’s “Birth of a Unicorn” – A youth and his horse make a desperate dash across unfriendly territory to save a village. Along the way, he finds death, life, and a miracle.

 Stephanie Ciofalo’s “Pearls and Bone” – When a creature from legend washes up out of the sea, a deaf woman's kindness and a guardsman's conscience are all that stand between their town's hatred and an entire race's damnation.

 Eric Esteb’s “Old Stories for New” – There's magic in stories, as a young woman discovers on her journey to recover her identity...and her shoes.

 Steven Watt’s “Beloved Enemy” – Surrounded by death it's easy to forget there is more to life. When the unexpected happens and two people find love instead, can they survive or will they wind up losing their heads as well as their hearts?

 Brian Tuomi’s “The Iron Falchion” – Elaina's beloved husband is missing, and nobody will help her. She must find him herself, even if it means going to frightening places and accepting assistance from a distinctly unusual source.

 Merrianna Mutton’s “A Wish in Time” – A writer's wish lands her in a story she hasn't written yet. Amazed, she finds herself face to face with her beloved characters—and some deadly problems she's not sure they can solve.

 Suzette Marie Lydick’s “Magic Is Not Always the Answer” – When teacher knows best, what can you really expect to happen?

First 300 Words:
Patryll shifted on the stone bench, waiting for his name to be called. His first visit to Shemara and already he had done something to annoy the authorities. He hadn't thought he'd done anything other than gawk like a grezin at the tall buildings and broad boulevards of the huge city…but who knew the minds of Eslin elves? He wondered if he had time to just run out and make sure Kiria was okay. He probably hadn't better risk it; he didn't want them any more irritated with him than they already were.


Patryll got to his feet, adjusting his short rider's cloak around his shoulder, and looked up enquiringly at the tall Eslin elf.


“Follow me,” the guard said gruffly. Patryll fell in step behind his well-armed escort and marched down a huge hallway of white marble and delicately veined stone. He couldn't help pausing in amazement at real windows along the exterior wall…with real glass...facing the sea. Most buildings in Shemara looked out onto the sea. To tell the truth, all that seascape made Patryll a bit queasy, but it sure was pretty to look at for short periods of time.


“Come along, youngster,” the guard said, looking back at Patryll and hiding a smile.


“Sorry,” Patryll said, almost skipping in his haste to catch up.
“So…uh…what's this all about?” he asked, addressing the guard's back. “I didn't think I broke any of the rules, but since I don't know them all, there is a good chance that I did break one of them…but I didn't mean to…I just came to the city to find my mother a present for the Festival of the Unicorn days in our village.

Vicki's Comments: The first thing I thought when I clicked on your link was, "Ooh, beautiful cover!" I think the artwork is gorgeous. The typography might need a tweak. The only other thing that comes to mind on the cover is that unicorns scream 'ten year old girls' to me. From reading your description, I didn't get the feeling that these are stories geared toward little kids. Maybe by tweaking the typography you can make the book look more like it's for adults. (This is also just my impressions as I'm waking up, so I could be totally off base here.)

Blurb: The blurb that is on the page isn't bad, it's basically one sentence descriptions of each story. Although none of the descriptions pull me in, maybe because they're too short. I might focus on the strongest story and give a longer description of that and cut the other ones. Then you can say, "and you get all these other stories too." Personally, if there was one story that was stronger, and I got very interested in the plot, I would buy the whole anthology just for one story. But be flexible too, if you change the blurb and after a month your sales aren't any better, try tweaking it again.

Sample: I know this is just a sample of one story in the book, but it's a nice sample. And that's what they'll get if they download a sample. My only suggestion here would be to make sure the first story in the book is the strongest one so it makes people want to buy the whole thing. I thought the writing was tight in this sample, no nit picks from me there.

Length: I have no idea how long each story is, or how long the entire book is. I suggest giving the reader an indication of what they're going to get. I like word count but some readers don't know what that means, so I would put page count in there too.

Time: I think you need to give this a little more time. It hasn't been for sale very long. Anthologies aren't the best selling items on the block. This book might just need a bit more time to pick up speed.

Okay, everyone else want to take a stab at this? Why do you think this isn't selling?
Posted by Victorine at 6:20 AM

Email ThisBlogThis!Share to TwitterShare to FacebookShare to Pinterest
Labels: Anthology