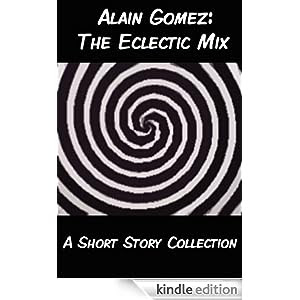 A Model Railway Man - Working on his model railroad set is more than just a hobby for John Wilson, it's his desperate attempt to fix the ghosts of his childhood. But his obsession with his creation may have an unexpected side-effect...

The Sacrifice - Set during the Spanish Civil War. The Captain of a naval vessel is sent away on a secret mission to destroy an enemy fort. Before he leaves, his fiancée begs him not to go. But he tells her he would give his life to protect Spain....

Celebrity Space (Part 1 of the Space Hotel Series) - Set in the not too distant future, a worker hopes that his new job at the spaceport will allow him to get his life back on track. While taking passengers to the space hotel "Moonwalk", a collision with an unknown object brings his dreams... and possibly his life... to a screeching halt.

“I must” said the Captain.

He looked at her resolutely.

His resolution made her back down a little.

“I need you” she said weakly.

“I would sacrifice my life to protect Spain.  So that I know you are safe.”

He took her in his arms and bent his head to kiss her.  After a pause he released her and left.

“It is a perfect day to sail, Captain.”

The Captain turned and acknowledged his first mate.

“God has blessed our voyage.  The enemies of King Ferdinand must die!”

The Captain smiled.  His first mate was young; perhaps too young to be on a mission such as this.  But the Captain knew that men on this ship were handpicked for their zealous loyalty to Spain rather than skill.

“It is a suicide mission” the Captain thought.  One ship assigned to destroy an entire enemy fort.  Their only possible hope was the element of surprise.  The King knew that even rumors of a Spanish fleet setting sail would put the enemy on guard.  He wanted this fort destroyed as quickly and as bloodlessly as possible.

“One ship” he had told the Captain.  “One battle in one night.  If you do this you will earn the gratitude of Spain and be compensated accordingly.”

Vicki's Comments: The author did tell me that there are three stories in this collection, and each story sells individually, but the collection isn't selling. I'll do my best to give my opinion as to why.

Cover: The cover doesn't appeal to me. Since this is the first thing people see, the first thing that draws them in, it's one of the most important things. I would definitely try a redesign.

First 300 Words: There were quite a few things that jumped out at me while I was reading the sample. I highly suggest joining a critique group to help tighten up the writing. I'm a huge fan of critiquecircle.com. I think running these stories through a crit group a few times would greatly improve them. Also, this needs an editor.

My best assessment on this is the writing needs to be tightened first, and then the cover needs to be changed. With a few minor adjustments, I think this collection can start selling.

What do you guys think?
Posted by Victorine at 9:44 PM