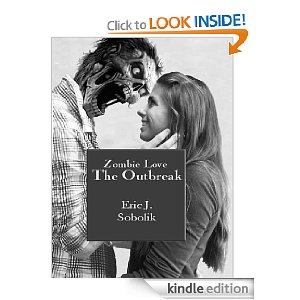 Author: Eric J. Sobolik
Genre: Young adult/supernatural/comedy
How long it's been on sale: 08-08-2011
Current price: $2.99
Marketing: Marketing so far has been family and friends, reviews on Amazon, and sending book review requests to many independent book review blogs.
Total sold so far: 63
Link to book on Amazon: Zombie Love: The Outbreak (Book 1)

Zombie Love is the story of a widespread virus, in a way that has never been done before. As people lose loved ones, some decide that sometimes the people you love are the only ones worth fighting for. As factions form, and the world crumbles, people must choose sides. Help or destroy.

When a virus is developed as the ultimate cure all by reversing death itself, the world is plunged into a crisis of faith, dedication, and love.

In book one we meet Summer Strom, a normal high school teenager who is thrown cruelly into a set of circumstances that nobody should have to deal with. She has to fight back against everybody she knows as she battles for the only thing worth fighting for. Love.

Sam Eckhart was alone in his office, enjoying a fine single malt scotch. A little liquid pat on the back for a job well done or, as his superiors put it, “a scientific breakthrough of biblical proportions” when there was a knock on his door.

In his head, Sam was comparing himself to Jesus. What he had accomplished was nothing short of a miracle and he knew that there would be a religion someday that praised him. Eckhartism or something like that. His new assistant cleared his throat, interrupting Sam’s fantasy. The boy was an acne covered little brat, and not only on the face. Sam had seen the kid in a t-shirt before and judging by the horrible red pustules covering his arms and neck, Sam could just imagine what the rest of him looked like, as hard as he tried not to. He had not liked what he had imagined. Now though, the bright red bumps were extra crimson, contrasting brightly against an almost translucent skin.

The boy opened his mouth and said something. Sam just shuddered, thinking about the kid naked. He almost felt sorry for him, but was more so disgusted by him. The kid spoke again.

Am I okay, thought Sam. This pre-pubescent punk did not have the faintest idea of what Sam had accomplished this night. Sure, it had taken him almost thirty-five years, in addition to the failed relationships and the deep self-loathing, but it would be worth it for this.

Sam snapped back to reality. He realized he had better respond or the kid would just keep blinding him with his pale skin and his pimples glaring like burning spots of teen awkwardness.

Vicki's Comments: The photo on the cover is very fun! I wish it were in color, but I am willing to overlook that because the picture is so clever. I'm not fond of the box with the title and author in it. I would re-do that part. But I do like the eye-catching photo. It suggests to me that this book is funny, maybe even a parody, and that the story is light and whimsical.

The description needs help. I would start with Summer Storm, and what her problems are. Be more specific. Language like, "thrown cruelly into a set of circumstances that nobody should have to deal with," doesn't give me an idea of what her challenges are. I want to know the plot, to figure out if I want to read it. What circumstances does she have to deal with? What does love have to do with it? Who does she love, and what stops her from loving him? (I assume by the picture on the cover that she falls in love with a zombie. Make that clear in the description.)

I like the beginning of the book. If I were to nit-pick, I'd have to say that it might need a little trimming. For example, "He had not liked what he had imagined." This is implied in the previous sentences, and therefore isn't needed. If I were to tell you I could just imagine what donky hair icecream would taste like, I wouldn't have to say that what I imagined isn't pleasant. There are a few other instances of this in the first 300 words. You don't have to hit the reader over the head with what you're trying to say. However, I did enjoy the beginning of the book and I probably would read on if it were sitting on my Kindle. If the entire book were repetitive like this, though, I would put it down.

I would suggest tweaking the cover, making the title and author name look a bit more professional, probably directly on the photo. If you can, I'd put the photo in color. I'd also tighten up the blurb. I think those two things will help you sell more books.

What do you guys think?
Posted by Victorine at 9:24 AM