The Masks of Our Fathers 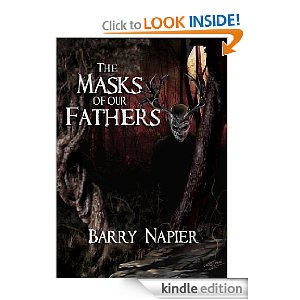 There is a powerful secret waiting in the forests of Moore’s Hollow. Buried in myths and ignored by history, there are dark things in the woods that laid claim to the land many years ago.

Jason Melhor heard about this secret around summer campfires as a boy. As a child, he came to know the legends well. But as he grew older, these fables disappeared with other childhood things.

Now, as a man unable to escape a past marred by an alcoholic father and his mother’s suicide, Jason has returned to Moore’s Hollow to bring his sordid family tragedy to a close. He has packed only a pistol and a single bullet.

But the secrets of Moore’s Hollow that Jason passed off as myths over the years are still lurking in the forests.

Jason Melhor drove to his father’s old fishing cabin to kill himself.
The drive from Philadelphia to the back roads of central Virginia had taken almost seven hours, but Jason hadn’t been aware of the time. He had watched the scenery roll by as if he were only a bystander. The radio had been on but served only as reduced background noise, as insignificant as the wheels of his Honda Civic against the road. The only noises he had been aware of at all during the course of the trip were the shifting and clinking sounds that came from the glove compartment. The pistol that he had stored inside it tapped against the interior of the compartment from time to time, as if urging Jason to speed up, to get there already, to get this over with.
At some point, he had left the interstates and four-lane roads behind him. These had eventually become the single lane roads that wound around, and often through, the gradual elevation of the Blue Ridge Mountains. It was the familiarity of these roads that had him pressing harder on the accelerator. He knew most of these roads from his teenage years, but the curves and the rise and fall of the terrain still evoked a sense of excitement in him; maybe he’d hit a curb too hard and flip his car over a guard rail, plummeting down the side of the mountain in a blur of trees, glass, and metal. It would certainly be more exciting than the firing of a single bullet.
As he made his way through the Shenandoah Valley, he knew that it would be almost unjust to die in such a way, though. If he were to die by sending his car off of one of these mountain roads, he’d be neglecting the inherited irony that would come by committing suicide in his father’s fishing cabin.

Gina's Comments:
Cover: The first impression of the cover is good. I like the dark eerie feeling. I imagine the horned thing to be a demon or evil presence. I like the red...also a sign of evil things to come. I like the lettering very much. All in all, this cover works for me.
Price: It's a fine price. If it's not selling, you might want to put it lower, but it's certainly not too expensive.
Product Description: Oh. I really like the product description. Spooky! I'd read this book based on that description!
First 300: I like the first paragraph but I am catching some little writing issues that might make fluidity of reading less comforting as it could be. I'm noticing a trend of "had taken" had been" "had watched". I think this puts the reader out of the story. To say it all in more of an active voice would work better for me. For example:
The drive from Philadelphia to the back roads of central Virginia took almost seven hours, but Jason wasn't aware of the time. He watched the scenery roll by as if he were only a bystander. The radio served only as background noise, as insignificant as the wheels of his Honda Civic against the road. The only noises he was aware of at all during the course of the trip were the shifting and clinking sounds that came from the glove compartment. The pistol stored inside it tapped against the interior of the compartment from time to time, as if urging Jason to speed up, to get there already, to get this over with.
It's a very subliminal thing, but it helps the reader feel like they're riding in the car with Jason instead of hearing about it later.
I believe this is the reason the book isn't selling. The plot sounds awesome. The cover rocks. The book description it solid. But...the writing isn't tight. You have extra words...watch those "that's". The average reader doesn't even know why they don't like it, they just know it isn't a fluid read.
I'd go through the book and do a search and destroy for the word that. Very seldom is the word actually required in a sentence. Plus, get this story in an active voice. I really think it has the ability to sell...at least by this beginning. But I personally would struggle with it as I'd be constantly wanting to tighten up your sentences.
Posted by Gina Barlean at 1:27 PM