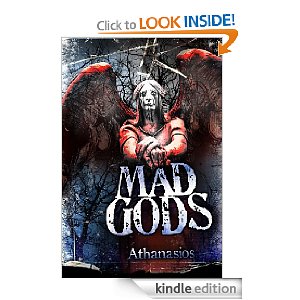 Author: Athanasios
Genre: Horror/Occult
How long it's been on sale: Since March 2011
Current price: $2.99
Marketing: I've given Mad Gods to be reviewed on a number of review blogs. It has been featured on a few but most are still keeping it on their TBR pile. I've also done many blog interviews and am part of various facebook groups including Indie Writers Unite!, Indie Writers International, Kindle Mojo, 4 Stars and Up, Paranormal & Dark Fantasy Writers & Readers. I've also been on Twitter and have garnered 462 followers from hashtags such as horror/occult/supernatural/lucifer/new world order/antichrist/prophecy/paranormal/satan/dark fantasy/apocrypha
Total sold so far: 50
Link to book on Amazon: Mad Gods - Revelation: Cancelled ? (Predatory Ethics)

Product Description:A child with the darkest destiny is wanted dead or alive by Satanists, the Catholic Church and the Dark Nobility. Kostadino must save him or let the world turn into hell on earth. What I liked about Mad Gods was that the author started the reader out on a journey right from the onset of the book--the plot was well written, easy to understand, and thought provoking. Cheryl Bradshaw Mad Gods takes its reader on a spellbinding journey that spans different continents and time periods. The author seamlessly weaves an intricate plot that connects an array of fascinating characters that propel the momentum of this wonderfully ambitious narrative. Aman S. Anand

Medieval Christian sculptures and mosaics stood among electric streetlights and movie posters. Kostadino Paleologos walked its streets seeing the past amidst the modern hustle and bustle and felt grief, called monaxia - a longing for home and the familiar, which deepened in Istanbul. Everywhere, he saw faded glory, and turned Istanbul to Kostadinoupoli. Greeks to Byzantines.

Every year, he returned to the city on May 29th. It was a duty, which had been handed down through generations of this family with brown eyes, monaxia and brown hair. They were successors to Athens, Sparta, Macedonia and Rome. Pericles, Leonidas, Alexander and Caesars, from Julius to Constantine, evolved into Byzantine’s Emperor. He was Christ’s Caesar and ruled by divine decree, undreamt of by later pretenders. France’s Louis and Napoleon, England’s Henry and Charles, paled in comparison to Justinian and the First Constantine the Great. They were history. They were gone in every way, but in memory. Nothing remained as it was. No amount of prayer, hope or monaxia could change that.

Kosta knew this and came to Istanbul, because there were souls, still clinging to the history of their memories. Just as people prayed to God, Greeks felt monaxia and souls roamed Kostadinoupoli. To them, it was still 1453, and they fought desperately to keep their city. These unfortunate souls were unable to leave. They wandered and died in their memory. Over and over, they suffered lesser pain, than the total agony of death. They were terrified to face this absolute split from life. They were unable to accept the fact that they lived in history, because giving into its finality would utterly destroy them.

They were right. It was total destruction they feared - death.

The cover: I don't think the book isn't selling because of the cover. It's quite shocking! My opinion is it's a great picture, great title, awesome lettering. It's a win in my opinion!
Sounds like your doing all the right things marketing. $2.99 might be a consideration. So many books out there to choose from and I know, even I take a chance on an Indie for 99 cents but $2.99...it would really have to speak to me. I know, I'm cheap. I'm guessing I'm not the only one.
I'm guessing content is an issue. Satan, Kostadino, hmmmm. Certain people will be attracted to this. Not everyone.
I'm confused with using reviews for the product description. This doesn't tell me what the book is. I want you, the author, to tell me what the book is about.
I'm not a fan of strange names. Kostadino is hard to connect with and you telling me a word, Monoxia, and then having to explain it...kind of puts me off. So many names are being thrown at me in the 1st 300. I have to keep re-reading this. This is a big history lesson dump before I'm invested in the character. I think it would be advantageous to allow me to see where I am and know who I'm reading about before I have to digest a history lesson.
After reading the 1st 300, I have no interest in going on. It's too heavy and I'm just not sure where it's going. You clearly have a very in-depth understanding of this world and Kosta's mission...and I believe he's there to collect souls? Old souls who long for home? Maybe I've missed the mark with that. Anyway, the concept is awesome. I wish I could say I liked the way you're going to present it, but so far the flavor of it is that you're trying way to hard. Relax. Let the story come through and not be hindered by the style you're attempting. This is very wordy prose to say the least. My opinion, for whatever it's worth, is that for sure, your book description and 1st 300 are what is preventing sales. If your entire book reads like the 1st 300...you may just need to accept that you will only appeal to a small audience of readers who love a puzzle and complex story lines which force them to study each word for meaning. They're out there I'm guessing. I'm not one of them, though.
Posted by Gina Barlean at 11:36 AM