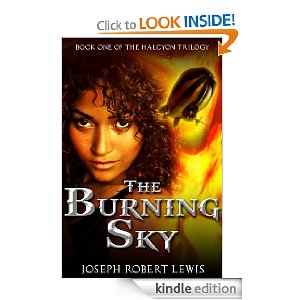 When the brilliant young engineer Taziri Ohana survives a devastating attack on the Air Corps, she is the only pilot left to chase the criminals responsible across the skies of Morocco. While helping the police to investigate, Taziri uncovers a vast conspiracy of deposed aristocrats and wealthy industrialists plotting to overthrow the Queen and plunge the country into war.

With assassins stalking the streets and riots on every street corner, Taziri quickly learns to defend herself as only an engineer can - by inventing electrical tools and weapons from whatever is at hand! But the country's only hope for survival may be a visiting Incan princess, a dashing Spanish fencer, and Taziri's airship Halcyon plummeting out of the burning sky.

The Other Earth: Explore this stunning vision of an alternate world where fantastical machines sail the seas and the skies, enormous prehistoric beasts still roam the earth, and the restless dead walk among the living.

Features: Multiple maps | An appendix explaining which parts of the novel are historical and which were figments of the author's imagination

A note about the text

This is a work of historical fantasy. Some of this world may be familiar to you. But in this world, Europe never emerged from the last Ice Age and only the southern regions are habitable. North Africa is cool, wet, and fertile. Ancient nations such as the Persian Empire have persisted, though others, such as the Romans, never rose to power. Some of the countries in this world reflect the cultures and attitudes of the Renaissance while others reflect the Industrial Age. Historical figures appear, though they too may be different from the ones you have known.

And while this world is separate and unique from our own, it generally resembles our world in the sixteenth century in some ways. But only some. Don't expect this world to conform to the history that you know. The people and places are different. The climate and wildlife are different. Even death is different here.

“Once more around the world!” Taziri swept her tiny daughter up in her arms and carried her through the air, soaring over chairs, through the kitchen, and back again. “Over the forests of Ifrica! To the pyramids of Aegyptus! Across the Middle Sea to the glaciers of Europa! Past the spooky ghosts of España!” Menna giggled and waved her chubby arms as a shining trail of spittle dangled from her lip. After several minutes of swooping around the house, she gently crashed her baby onto a pile of cushions in the corner of the dining room. “And back home to Marrakesh!” Taziri groaned as she straightened up and rubbed her back. “She’s getting heavier.”

Yuba finished setting the table. “You always say that when you come back.”

“Babies do that.” His face and voice were both dull as old stone. “You know, she’ll be walking soon.”

“Really? Already?” She stroked Menna’s cheek. “Time flies.” Time flies, Menna grows, and you, Yuba, what about you? What’s happening to you? His once glorious mane was gone, shaved during her last trip as yet another surprise to come home to. They were all doing that now. She saw it in the other cities, everywhere she went. The men were changing. Some things were small, like the shaved heads. Other things were more troubling, like the absence of their veils. When she entered a teahouse or café, they glared and grimaced at each other and at the ground, loathe to look her in the eye.

Yuba paused in the doorway. “I went by the university this morning. My work is really backing up. Trees to be moved, new gardens to dig, and the dean wants another pond with a fountain. They were asking when I’ll be back full time. It’s been almost a year since we had Menna. They’re starting to talk about bringing someone else in to replace me.”

Vicki's Comments: I like the cover. It looks very professional. I don't think I would change a thing with the cover.

The blurb is too long, in my opinion. I would cut the beginning where you compare your book to other authors. I would also cut the Features section and the Note about the Text section. You can put the note about the text in the front matter of the book, if you think it's necessary.

The description itself I think is good. If you cut some of the extra stuff out, I think readers won't be too intimidated by the large amount of text.

The writing was good, although I think that first paragraph should be split up. Maybe have an editor look at that. I'm also not sure the story starts at a particularly good place. I like it because it shows that men and women have very different roles in your fantasy world, and that the world itself is different, but I'm not sure this snip grabs me in a way that makes me have to read more. But the beginning is always the hardest part to figure out.

I would tighten up the description, get rid of the stuff you don't need, and ask others about the beginning of the book. Let's see if we can't get some opinions here. What do you guys think? Does the beginning of this book grab you, or would you start in a different place?
Posted by Victorine at 8:52 AM