One Insular Tahiti (a novel of reincarnation) 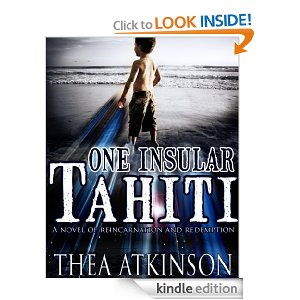 Luke MacIsaac is dead, and not restfully dead. His death has come the way he always feared it would: in the claustrophobic, underground heat of a Cape Breton coal mine. He had suspected it would end this way, had embraced it even, so while his body is buried, his soul settles into a watery existence of endless waiting.

But in short order the placid waters of his afterlife turn to rolling seas of time and memory as his violent past plays out again for him. Images of war, childhood abuse, and the tortured life of a brother he loved and failed threaten to inundate him.

More than anything, he wants to escape.

In his confusion and pain, he senses a kindred spirit in Astrid, a newborn struggling to stay alive. Luke helps her in hopes she may one day be the one who brings him out of his purgatory and into a new incarnation.

What he doesn't realize is that Astrid's soul is linked to his own hellish past life and that he has selected her because of it. In order to live again, he must experience all the anguish they went through together, and watch helplessly as Astrid goes through sorrows of her own.

Can he endure those memories long enough to make the connection and find forgiveness?

My death in '59 came the way I always feared it would: in the claustrophobic underground heat of a Cape Breton coal mine. The tunnel had been inching its way below the Atlantic for decades, and I'd picked and hacked my own way further into it day by day until, when an inevitable collapse happened, I wasn't surprised. Just very pissed off.

I must have known it was coming, embraced it, even, because my limbs went deaf to the warnings from my hung-over brain. From behind me, my name, yelled out by the foreman: Luke. God, he's trapped. Someone get him outta there. I couldn't breathe; I knew I couldn't breathe, and yet the scent of apples came to me anyway. Sammy, I thought. Sammy or Gran come to get me, bring me to purgatory.

Funny how the deceased can have such a living scent. Everything went black under the weight of dirt and coal. And so now I'm here. Waiting. Except all is not quiet. Not anymore. Not like it used to be when I first realized I was dead. There's the sound of swells and wind now as though death were an ocean that overcomes me now and then with memories of my last life. It makes me think of Melville with his great whale and his Ishmael who was meant to be some sort of symbol for God knows what.

Meanwhile, I float in water, or swim, or spin freely as though I were a day old embryo struggling to join the lining of a womb. So maybe water does link me with Ishmael in a strange way: maybe it's the womb of fluid that cannot be escaped, the source of all, the infinite mother. Salvation.

Brah. God, too, could be a white whale beneath me; I've never so much as felt a bump. And if Ishmael means God hears, then my death and quiet appearance onto this god-forsaken empty ocean only proves to me that prayer is the voice of desperation.

Vicki's Comments: I usually start with the cover, but with this one I'm going to start with the genre. The author listed this as literary paranormal, and then in parenthesis added "Is that a genre??" This tells me mountains of information. If the author can't say for sure if that is a genre, how are the readers going to know if they want to read this book? Like it or not, book sales hinge on the reader being able to tell at a glance what type of book they are getting. If the type of book is obscure, or something the reader has never experienced, the reader won't know how to classify the book. Sure, new genres pop up all the time, but they are sub-genres of already well known classifications and they ride on the coattails of the larger well-known genres until they are known for themselves.

Paranormal is huge. We might be able to get away with riding on the coattails of the paranormal genre if this genre has enough of that to satisfy the readers of paranormal fiction. The problem here is that literary is not huge. It's a niche market, and one that appeals to a certain type of reader. I'd be very interested to know how many people who love paranormal fiction are also looking for a deep literary read. I'm guessing the percentage is pretty low. And I'm pretty sure that literary fiction lovers in general are not that into paranormal fiction.

Here we have a problem. We have created a new genre, crossing two genres that are nothing alike. We have a huge popular genre that could be tapped into - the paranormal - and yet if you package this book to sell to the paranormal lovers you're going to get a poor response because the majority of them are not looking for a literary read.

Without even looking at the cover, blurb, price or sample, I'm guessing this is the main reason this book isn't selling. It's going to appeal to a small percentage of people. Now, I don't think that this book could NEVER sell well. I know I've bought books that initially wouldn't have appealed to me because a friend told me it was fantastic and I took a chance on it. I just think it's going to be one of those books that has a very slow build, and only if it gets into the hands of people who end up loving it and being passionate about telling others to read it.

Now, on to the normal stuff. I'm looking at this cover and I really want to like it. There are elements of it that I like. But I think there are a few things that could be improved. The type is a big one for me. I don't like the white outline on "One Insular" or the black outline on "Tahiti." I like the little boy on the beach, but it took me a while before I saw the stars on the bottom, and I have no idea what the blue streaks are. It's not giving me a paranormal vibe, and I really wish it were. I do think it gives more of a literary vibe, for me at least. Which is another reason it's floundering in sales. Literary = Niche. I don't necessarily think the cover needs to be changed, although I would love to see the type changed. I think the type needs to look more professional.

The beginning of the book is good. And it definitely give me the literary vibe. The character's voice is strong, and that's appealing. I don't think there's anything wrong with the writing. I think this book is going to be a slow mover because of what it is. That's probably not the best news, because there's no quick fix to get this book off and running. I'm guessing this book will gain loyal fans. Take advantage of them. Get them to spread the word about the book. Hopefully that will help sales.

What do you guys think?
Posted by Victorine at 9:11 AM