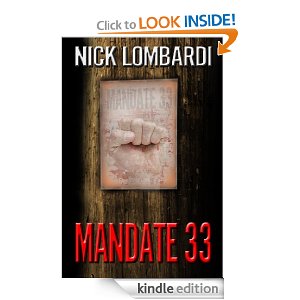 Author: Nick Lombardi
Genre: Literary
How long it's been on sale: May 2011
Current price: $.99
Marketing: Networking on Amazon chat forums, social networking on Facebook, Kijiji ad, Craigslist ad, got involved with a couple of sites where authors can get interviewed/featured/reviewed, Just recently offered it up for free as part of a free book promotion day, where 535 copies were downloaded in one day.
Total sold so far: 32
Link to book on Amazon: Mandate 33

In Corpopolis, under the rule of a dictator, only citizens carrying government-issued parenting licenses are legally allowed to bear children. Any child in the custody of adults without a parenting license will be eliminated. The law is passed, they say, to protect children from unfit parents. But certain citizens who doubt the motives of the Corpopolis government soon begin to ask questions, and stumble onto a plot which threatens the future of the entire country...and themselves.

The screams were loudest at night, when the soldiers came out. They executed their raids with fine precision, rooting through crevices and nooks with the snouts of their rifles and not touching any of it with their hands. When they found what they were looking for, they dealt with it. When something could not be contained, their whistles shrieked and the soldiers moved forth to corral the fugitives.

The streets were empty and hopping full all at once—empty of civilians and coursing with military personnel. The officers scoured every cranny and trashcan and back alley, anywhere a criminal could be stashed for safekeeping. They peered under cars and then inside the cars, their flashlights swinging around to point in the cabs. If something suspicious was spotted inside the car—like a duffel bag on the floor or a throw blanket that looked lumpy enough to hide something—they would spin their rifles around and punch at the windows with the butts ends to get in and inspect closer. Nearly every instance was a false alarm.

The soldiers assigned to crawlspace detail marched the streets in brisk jogtrots, as they had much ground to cover. Flashlights and reflectors fixed to their helmets aided them. Things were upturned, and lots of cobwebs snapped and broken. Large pieces of decayed plywood which capped stairwells like splintery throw rugs were kicked aside with feet clad in black shoes, the soldiers looking for the dirt swept underneath.

Vicki's Comments: I like the cover. The font is clean and I like the treatment. I like the image too. However, this doesn't give me a 'literary' feeling. I'm wondering if the book cover isn't giving the wrong message about the book. To me, it says thriller.

The description is wonderful. My only nit pick would be to focus on a character, someone fighting this system. Maybe someone who is hiding a child, who lives in fear each day? I want to connect with a character. Other than that, I love the premise of this novel and would love to know more. However, the description doesn't say 'literary' to me either. By the description, I would expect a fast paced thriller.

I felt distanced from the beginning of the book. I would prefer to see this happening from the viewpoint of a character. Right now it seems like an omniscient being who is narrating. I feel no fear, because the omniscient being is not in any danger. They're just telling what is happening. I am interested in what is happening, but I would prefer to feel like I'm there in the action, crouched down hiding from a soldier. I'm not getting a literary vibe from the writing, however I am the first to admit I don't read literary novels so I'm probably a bad person to ask. I would see what others say.

Hopefully the book focuses on a character soon. I might chop the beginning omniscient POV and start with the character. I would also focus the blurb on that character as well.

What do you guys think?
Posted by Victorine at 5:12 PM

Email ThisBlogThis!Share to TwitterShare to FacebookShare to Pinterest
Labels: Literary