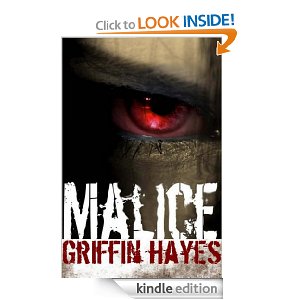 When a series of shocking suicides rock the small town of Millingham, Massachusetts, the authorities are left with a single, chilling question. Why are all the victims gouging their eyes out?

Only seventeen-year-old Lysander Shore knows these aren't suicides at all. There's a serial killer stalking the people of Millingham. One that murders at will and never leaves a trace.

Before long, the trail of bodies leads Lysander to a dark secret that traces back to a witch's trial and execution 350 years ago. The deeper he digs, the more he realizes the victims aren't nearly as random as they seem. In fact, the killer has a list and Lysander is next.

The stranger grinned and his sunken cheeks made his face look like a skull.

Lysander Shore's family hadn’t been in Millingham longer than a week, but he was sure somehow he had met this man somewhere before. Maybe filling bags at the grocery store or delivering mail down the street? This was going to torture him the whole day.

Lysander stuffed his lunch into his knapsack and then slowly held out his hand. The cold palm that slid into his a second later made Lysander's stomach turn. His father must have noticed the discomfort on Lysander's face, because Glenn's cheeks flushed with embarrassment. At least for once it wasn't about Lysander's black nail polish or matching combat boots.

"You'll have to excuse the mess," Glenn said, clearing a place on the couch where the stranger could sit. "We're still getting settled."

A pin on the lapel of the man's suit jacket read “Peter Hume” and below that “Zellermann’s.” He was probably an insurance guy, Lysander thought, here about the fire that had destroyed their old house in Hayward.

The two men spoke about how the house was a complete write-off, his father running through a list of things that were destroyed, when Peter Hume peered up at Lysander. The odd glint in his eye instantly made Lysander uneasy.

“Do you have any pictures?” Hume asked Glenn. “So we can take inventory of what you lost.”

“Yeah,” Glenn said, looking at his watch. “You need those now? I gotta leave for work.”

Glenn sighed, as he always did when asked to do something menial but necessary, and headed for the kitchen. “You want something to drink?”

“Earl Grey would be nice.”

"That's the only tea we have," Glenn said robotically. He seemed dazed. Or was he hypnotized? Lysander couldn't tell which.

Hume's eyes were shining. "Legend has it an old Chinese man gave Lord Grey the recipe for saving his son's life, if you believe that sort of thing."

His father shrugged and disappeared into the kitchen.

Now Lysander and Peter Hume were alone and the air in the room seemed to drop ten degrees. Slowly, the smile disappeared from Hume's face.

“You were warned not to come here,” Hume said, his voice gravelly, almost hoarse. Lysander peered down at Hume's scalp and saw the man's translucent flesh squeezing the plates of his skull together.

Lysander's breath caught in his throat.

“He knows, Lysander." Hume's voice was more forceful. Desperate. "Knows you’re here. He knew the minute you arrived. Felt you crossing the town line, just like I did.”

Love the cover. Seriously. That's not your issue. I wouldn't change that at all.

I'm not in love with the first sentence of your 1st 300.
By the 3rd sentence I can see the writing could use some love. These sentences aren't flowing as well as I might like. An adverb here, passive wording there, and some tightening up of sentences is needed. For some reason I am wondering why we are using the name Glenn. This is from Lysander's POV, so his father, father, in my thinking would work better. I'm sure you have a reason for that, though. It's just something I'm noticing. But that ending to the 1st 300 totally grabbed me by the throat and made me want to read. I don't think it's the writing that's keeping people from buying the book.

I think this book will take off eventually for you. Sounds like the plot line is very good. I read your reviews and aside from the one 2-star review, the rest were flattering. For me, this tells me you need to play with the price.  You have quite a few books out. How have those done for you? This one seems to have a good number of reviews. I'd say it's time to play with price or look at tightening up the writing. I think your audience just needs to find you. This one is actually confusing. It should be selling.

I hope others chime in here to give their thoughts. This book looks to be right up my alley.

Gina M. Barlean
Posted by Victorine at 11:42 AM