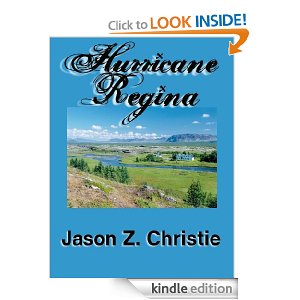 Hurricane Regina is a return to the golden days of sci-fi/fantasy. Inspired by Asimov and Heinlein, it's a grand, sweeping adventure in the tradition of 40s cliffhangers.

Regina Long, the President's daughter, has been kidnapped by a man who claims to rule the world. It's up to Captain Dan Nolan to rescue her and save the world...from her. He travels to the bottom of the ocean, Iceland, Nova Scotia and beyond as the world comes apart at the seams.

If she can turn the tables on Tom, her captor, she can gain his mastery over the planet. Far from needing rescue, she wants solitude. Regina has other plans. Without care toward the havoc she wreaks, she reshapes the world in her own image, and considers exercising ultimate power.

Experience the cataclysm that is...Hurricane Regina.


Captain Dan stood at the rails of his ship, sternly and stoically surveying the choppy waters.

"Sir, we're just about out of fuel. We don't have enough to make another pass and get to port before she hits, sir,” Yeoman Clancy pointed out respectfully, in accordance to his duties.

"Yeoman,” the captain said through gritted teeth, never taking the binoculars from his eyes. "If you don't shut up with your nonsense concerns, I am going to throw you overboard." The statement was delivered calmly, evenly, seriously.

Clancy imperceptibly nodded to a man who wasn't looking, and dismissed himself in silence.
His own reaction gave the captain pause. He wasn't known as "The Highest High-C On the Bloody High-Seas" for nothing. Whatever they actually meant by it. He knew his crew loved him like no other, harsh taskmaster or not.

Still, all this for a stowaway?

Twenty minutes later, Clancy returned. An observant captain would have noticed the liquid courage on his breath, steeling himself with alcohol as he did to gain the confidence for another confrontation with his mentor. The world had forced Dan to relocate permanently to the ocean in order to save a shred of his fading humanity. It always came to this, in the student-teacher relationship.

"Sir, we c- ngh,” Clancy emitted, as Captain Dan's left hand raised up silently and backhanded him into unconsciousness.

He saw...something, out there, in her. Her being the sea. Everything was a she when you lived on the ocean with a bunch of hard legs. But he knew his feelings. He trusted them above all. His instincts and feelings made him who his was. And he was the best rogue pilot the NAU Navy could afford.

He radioed the contower. "Kill the engines, and drop some boats,” he said. "I want everyone awake, in these boats, rowing and searching until we find her again. Now,” he gritted. "Move!”


Vicki's Comments: I think the cover needs work. The fancy font at the top is hard to read, and the white drop shadow doesn't look professional. I would suggest getting rid of the blue background. I also don't get a genre feeling from the picture. I can't tell what kind of book I'm getting. It looks like a vacation brochure. My suggestion would be to hire a cover artist. They don't have to be expensive. I attended a conference this weekend where Mark Coker spoke. I learned that if you send an email to list@smashwords.com, you will get an auto-responder email that lists low cost cover artists and book formatting specialists. That's one place you can start.

I would cut the first paragraph of the description. It's usually not a good idea to start by telling the reader what to expect. The description should give the reader this flavor. If a description starts out: "I wish I hadn't died in a public bathroom," you know right away the book is going to be humorous. The author doesn't need to start out by saying, "This book is a humorous look at the afterlife."

The next part of the description confused me. The kidnapping doesn't seem to have a point. If the world is going to be destroyed by her, I'm not sure how the kidnapping comes into play. I would get some suggestions from other authors on how to improve the description.

The beginning of the novel needs some work in my opinion. I would join a critique group and post a few chapters. www.critiquecircle.com is a good one. I got confused a few times, I think there are point of view shifts and unclear pronouns and unnecessary adverbs. With some tightening up, I think this book would do much better.

What do you guys think?
Posted by Victorine at 6:15 AM