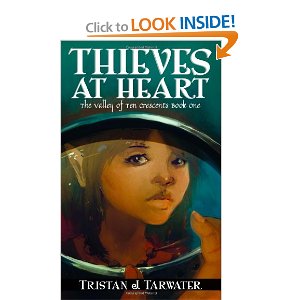 Author: Tristan J. Tarwater
Genre: Fantasy / Gray Fantasy
How long it's been on sale: October 1, 2011
Current price: .99
Marketing: We had a booth (and spoke on a panel) at Seattle's GeekGirlCon in October.  We've paid for 2 online ads for Oct-Dec (1 webcomic site, 1 fantasy RPG site).  We maintain a presence on Mobile Read forums, Createspace forums, Kindle Board forums, and link to our site in the signature of all of the various forums we frequent.  We participated in a free paperback book give away on Goodreads.  We have sent out free copies to reviewers.  We're currently working on optimizing the SEO of our website.
Total sold so far: Less than 75.
Link to book on Amazon: Thieves at Heart

Tavera has grown up an outsider. A half-elf in a land of humans, she finds herself dragged through various jobs for other people’s benefit and used for their gain. When a thief named Derk plucks her from her latest job she expects more of the same from the cunning rogue, but instead finds direction, guidance and protection for the first time in her life. Her pa belongs to a group called The Cup of Cream, a group of elite thieves, scoundrels and other sorts who seek not only personal gain but to keep balance in the Valley. To join their ranks would please her father and give Tavera the acceptance she’s been seeking all her life. When the unthinkable happens, she is forced to wonder if the Cup sees her as just another tool their sleeve, or if they under-stand she is an individual with her own desires, whose heart beats faster with every take. When she needs them most, with they be there for her? She’s about to find out.

Chapter 1
Out of the Dregs

“Tavi, I really wish you weighed more, girl. You can never pull these things tight enough!” Prisca the Tart stood up from the bed, examining the ties of the wide belt she wore under her bust in the full length mirror. A look of disappointment came over the woman’s highly painted face as she looked over the leather cords crisscrossing her back, brown threaded through pale pink matching the dress she was wearing. Her light eyes lit upon the tiny bit of the girl reflected in the mirror, a small brown hand crawling away once it was noticed. The woman sighed and laughed, brushing out her skirts as she walked back to the bed and sat in front of the little girl, the hay and feathers settling with a rustle under her weight. “Come now, sweets, use those tiny fingers of yours and fix what you’ve done.”

“Yes, mam,” came the quiet voice, the girl’s head bowed as she went to work. Skinny legs shifted under the girl’s small frame and she scratched at her greasy dark hair, what remained of her locks barely long enough to cover one slightly pointed ear. Her hand brushed against the other ear as her hands went to Prisca’s laces. Where there was supposed to be a point was instead a straight line, pink and tender where a knife had cut the cartilage away. It still sent a shiver through Tavi when she touched it. The loss of her hair meant she couldn’t hide the telltale signs of her blood or her past and her face grew hot even now, recalling Prisca’s announcement and remedy. Lice and a shave. “Can’t have bugs hopping about when I’m on business,” Prisca had said as she shaved off the girl’s knotty black locks.

Vicki's Comments: I like the cover. It does look like a fantasy novel to me, however the girl on the front looks very young, so I automatically assume the book is middle grade. This is probably not correct, so it might be something to look into. If most people who see the cover assume this book is for kids, it might be hindering sales. Maybe see what others say about the cover.

I found the description too wordy and confusing. I'm not sure what 'just another tool their sleeve' means. I think the description definitely needs help. I also can't tell from the description if Tavera is a child, a teenager, or a young adult. That would help pin down an audience. Most of the time if a protagonist is a child, the book is aimed toward a middle grade audience.

I might run the first part of the book through a critique group, I found some places where the wording was awkward. I think it could be improved. I also prefer a definite point of view character, and this is written in omniscient, which is an older style, and not very popular these days. It could be off-putting to readers.

My suggestion would be to rework the blurb, and get some outside opinions of the novel itself to see if a bit of tightening up could help. This might be a hard sell if it is written as an adult novel but the protagonist is a child. I might be more clear who the target audience is. What do you guys think?
Posted by Victorine at 9:44 PM