Not Fit For Human Consumption: A Comedic Farce 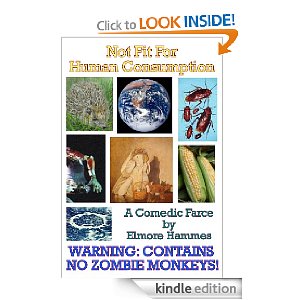 Author: Elmore Hammes
Genre: Humor with elements of science fiction and fantasy
How long it's been on sale: 2 years
Current price: $1.00
Marketing: When it was first released, posts in Amazon discussion boards and a couple other online forums such as Kindleboards. Participated in some local author book fairs, which is where most of the print copies were sold. Sent out a few review copies, the one reviewer who posted on Amazon gave it 5 stars. I also traded a few Amazon tags with some other independent authors. I set a low price ($1 Kindle, $7.95 paperback) hoping that would help but I don't think it has.
Total sold so far: A little over 100, with 25 print copies and the
rest Kindle sales.
Link to book on Amazon: Not Fit For Human Consumption: A Comedic Farce

Sadly, not enough beer was drunk during creation of this novel to include an airplane lavatory sex scene. Oh wait, there is one of those. But don't get your hopes up - all the good parts are left out.

The novel contains suggestive language (the PG-rated variety), and those seeking enriching literature are best served by looking elsewhere. However, if you are in the mood for a farcical comedy step right in, and meet:

Arax the Annihilator, an entity bent on destroying the earth;

Henry Stewart, member of the Hedgehog Surveillance Network, who hopes to be part of the New World Order after the government topples;

Loretta the rabbit, who just wants to hop free in a meadow after a lifetime of captivity;

Omar Sharteen, who wants to bomb his own Parliament building so the US will build a nice shiny new one;

Mortimer Johnson, president of the Mount Carmel Junior High Science Club, who fears he has betrayed Science by having a crush on Alicia Fleppe;

Peter the Cockroach, a prophet who sees cockroaches as the final survivors;

Alice Walters, widow of a fallen soldier, who discovers her husband's secret life;

June and Robert, a happy couple who might find more happiness than they can handle;

Mark Andrews, who is in an underground bunker and is afraid to push the button when nuclear war is imminent;

and a host of others, including but not limited to strippers, teachers, t-shirt vendors, bookstore clerks, football players, moths, prime ministers and cats.

The author regrets immensely not having any zombies in this book. Or monkeys. Or zombie monkeys.

People across the city of Kanapolis, Indiana, cursed as their TV programs were interrupted by the dynamic tones of channel KAN’s news bulletin alert. The camera zoomed in to an impeccably-groomed man in his late thirties, wearing a grim expression but one that still let them all know that whatever the crisis, he was more than prepared to deliver the news without a single lapse of decorum or misplaced hair.

“Good evening, this is Peter Wellington, KAN News, with a special report from the Middle East. A coup has occurred in the small territory of Jartanzia. Located at a crucial juncture of three area powers, the territory had been controlled by Iranian forces since 2003.”

The picture changed from a close up of the middle aged anchorman to a map of the Middle East, with Jartanzia outlined in bright yellow, with Iran, Iraq and Sudan labeled in large red type, showing how Jartanzia met in between the three countries.

“Oh, so that’s the Middle East,” Georgia Stewart said, smiling at her son Henry who sat next to her on their living room couch. “I always thought it was somewhere near Maryland.”

The report continued. “Communication had been cut off from Jartanzia since yesterday afternoon, and forces from each surrounding nation had begun to gather, as previously reported. The United Nations was urging caution on all sides, hoping to prevent war. A declaration of independence from all foreign territories was issued just moments ago.

We do not have any details as to who is behind the coup or who is now in charge. Let’s go to World News Correspondent Melissa Rivers.”

“Melissa, Peter Wellington here, and yes, we are broadcasting live.”

Vicki's Comments: I think the cover looks like a non-fiction book. To me, it looks like a kid's encyclopedia. The words at the top are very hard to read. I think this is a major issue for your book. Anyone browsing for a humorous book will probably speed right past yours, as it doesn't give me the feeling that this is a humorous novel. I would suggest a new cover.

The description is humorous, but I'm afraid that the huge wall of text made me not want to read any of it. I highly suggest reworking the description totally. When I read a description I want to know the basic storyline in a summary fashion. I'm still not sure exactly what this book is about after reading your description. It doesn't make me want to read the book. Don't feel bad, descriptions are the hardest part, IMHO.

The story itself kind of confused me. It could just be me. I would get some more opinions on it to see if it's just me, or if the story needs some work. I would suggest getting some beta readers to give you some opinions on it.

I would change the cover and the description and you'll be leaps ahead of where you are now. What do you guys think?
Posted by Victorine at 9:43 PM

Email ThisBlogThis!Share to TwitterShare to FacebookShare to Pinterest
Labels: Humor