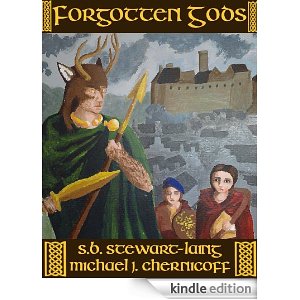 Winter, 1745. Scotland is losing a war for independence. Robert Maxwell and his fellow soldiers beg for supernatural aid from the daione sìdhe, magical inhabitants of Scotland exiled in ancient times to a parallel plane of existence. The sìdhe ask to negotiate with the Scottish leaders, who rashly enter into a magical contract promising the sìdhe a permanent return to Britain in exchange for their help in the war.

Access to sìdhe soldiers and magical weapons gives the Scots a temporary advantage, but their agreement lacks stipulations to prevent lone sìdhe creatures from hunting humans, stealing children, or riddling the countryside with hidden portals that can whisk passers-by into parallel dimensions. Worse, the sìdhe leaders seem unable to stop the chaos.

The Scottish leadership work to understand the sidhe and find a way to coexist. But they find sìdhe are not as disorganized as they appear, and harbor a sinister goal: to end the war on their own terms and secure their claim on Britain, no matter what the cost to their human allies.

Light from the full moon sliced the landscape into sharp white highlights and dark blue shadows. Robert Wardlaw-Maxwell stood knee-deep in frostbitten weeds, hands clamped around his musket, his every muscle tensed and ready to respond to the first hint of movement. Even though he had fired the gun many times, it still felt foreign in his hands. Besides, he did not know if any of the balls had ever reached their marks, so he could tell himself he had never actually killed anyone.

“They’re no’ comin’ this way,” Hugh MacBain whispered from beside him.

Robert nodded. He hoped Hugh was right, and the prolonged silence meant that the government men had run in another direction. The last time he fought someone at close range was months ago at Gladmuir, and that wasn’t even a proper battle: just him flailing with a pitchfork, more in self-defense than in any serious attempt to kill one of the English soldiers.

A muffled crack of gunfire was followed by shouts and the crunch of breaking branches. Robert flinched, and took a quick, involuntary step backwards.

Another round of gunfire, this time more distant. It sounded as though the English had indeed fled south, into the open moors. Robert allowed himself to relax.

Racing footsteps on the road, followed by shouting.

Before he could fully register the figures sprinting towards them, he heard another gunshot, this time close enough to feel the sound in his bones. Hugh collapsed forward.

Robert first thought was to help his friend. Then he saw the dark patch spreading quickly across Hugh’s back, and realized it was too late. Robert raised his gun to his shoulder and took aim. The English soldier had just begun to run again, a musket still smoking in his hand, as he dodged between his comrades.

Vicki's Comments: Book cover. I like it, it does give me a professional feeling, but it looks like a middle grade book. If I were browsing Amazon's shelves for a fantasy novel for my 12 year old, this one would attract me. However, you would lose me at the description.

When I read a description, I do it to find out the plot of the book, but I also am looking for the main characters and if they are interesting to me. This description is completely void of a main character, or any characters for that matter. I highly suggest rewriting the description and give the readers a character, their major conflict, and why we should care. I want to know why this character (or set of characters) is going to keep me turning the pages wanting to know what happens to them next.

The opening to the book is good. I think that's right on the money. My guess as to why this book isn't selling is the cover looks too "young" and the description needs a main character to focus on.

What do you guys think?
Posted by Victorine at 5:15 PM