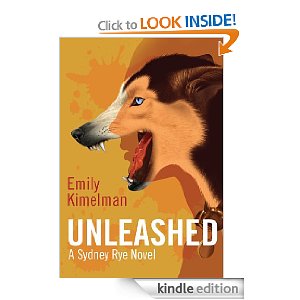 "Emily Kimelman is witty and insightful, and writes with wisdom, care, and diligence."

"[Unleashed is] for readers who like well written and well constructed novels... including the ending that caught me off-guard (something that rarely happens)."

-And Tyson Adams, author of the blog "Right What You No"

When Joy Humbolt loses her job and breaks up with her boyfriend she impulsively adopts a giant mutt named Blue. Soon a dog walking business on the exclusive Upper East Side of Manhattan is thrown in her lap. On her first day, Joy discovers a dead body and is quickly sucked into a hidden world of political power, wealth, and secrets.

While Joy tries to expose the murderer, she will learn just how far some people will go for money and how far she is willing to go to protect her family.

My dog died today. He once took a bullet that was intended for me. A bullet that ripped through his chest, narrowly missing his heart, and exited through his shoulder blade, effectively shattering it. This left him unconscious on the floor of my home. Amazingly, this bullet did not kill him. It was a bar of chocolate that I accidentally left where he could reach it, which he did. It gave him diabetes, which killed him.

Ten years ago I adopted Blue as a present to myself after I broke up with my boyfriend one hot, early summer night with the windows open and the neighborhood listening. The next morning I went straight to the pound in Bushwick, Brooklyn. Articles on buying your first dog tell you never to buy a dog on impulse. They want you to be prepared for this new member of your family, to understand the responsibilities and challenges of owning a dog. Going to the pound because you need something in your life that's worth holding onto is rarely, if ever, mentioned.

I asked the man at the pound to show me the biggest dogs they had. He showed me some seven-week-old Rottweiler- German shepherd puppies that he said would grow to be quite large. Then he showed me a six-month old shepherd that would get pretty big. Then he showed me Blue, the largest dog they had. The man called him a Collie mix and he was stuffed into the biggest cage they had, but he didnt fit. He was as tall as a Great Dane but much skinner, with the snout of a collie, the markings of a Siberian husky, the ears and tail of a shepherd and the body of a wolf, with one blue eye and one brown. Crouched in a sitting position, unable to lie down, unable to sit all the way up, he looked at me from between the bars, and I fell in love.

Vicki's Comments: I like the cover, but my first impression was that the book was a children's book. Maybe a middle grade book about a dog? When I look closer, I see the shadow of a face. That makes me think it's a book about a person who changes into a dog. Reading the description, I realize that my first impression is way off. I would get more opinions on it, but I think a new cover would really help.

The description is pretty good, but I don't like the reviews stuck in there. When I go look at a description I want to know what the book is about. I also feel like the description gets a slow start. To me, the murder is the important part, not the dog walking business. I might work on the description too.

The beginning didn't feel like a murder mystery to me. It didn't grab me and not let go, but I was mildly interested. I did get the feeling from the opening that this woman is alone in the world. It seemed at odds with 'how far she is willing to go to protect her family' that was in the description. I don't get the feeling that she's a family girl.

I would change the cover first, and work on the description next. What do you guys think?
Posted by Victorine at 7:44 AM