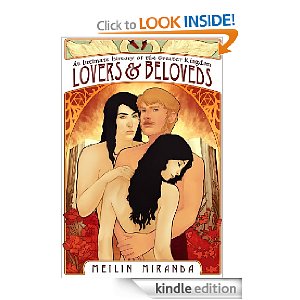 Sheltered Prince Temmin arrives at the intrigue-filled court of his father and finds his world turned upside down. Suddenly he's the target of assassins sent by enemies he didn't even know he had. His family's immortal advisor immerses him in a magic book filled with the forgotten stories of the Kingdom's women. And he's falling for the beautiful twins Allis and Issak.

But the twins are the human avatars of the Gods of love and desire. To be with them, Temmin must fulfill a prophecy so old it's moved into folklore--a prophecy that may signal the end of the monarchy--and his father does everything he can to stop him.

Temmin must choose a path: one leads to ultimate glory for Tremont, the other to its end.

The first book in the fantasy saga "An Intimate History of the Greater Kingdom."

In the stable yards of Whithorse Estate, two lanterns burned. They shone up at their owners, who sat on a straw bale against a brick wall. The low light transformed the rangy, blue-eyed one’s fair hair into a burnished bronze, and turned the shorter, stockier one’s eyes near-black. Both wore battered old tweed caps, and coats just heavy enough for the early spring night. The shorter one held a flask of wuisc, full at the start of the evening, and as its level dropped, they listed into one another more and more.

“Say, d’you plan on drinking that whole thing yourself?” said the tall one.

The shorter one passed the flask over. “Be careful, Tem, you’re not used to this stuff.”

“And you are?” said Temmin. “If I’m going to the Keep, I have to learn to drink.” He took a choking swallow, and pulled a face. “Where did you get this stuff? Besides, it’s our last night to do this sort of thing. Any sort of thing.” Temmin sighed and bumped his head against the bricks. “Why do I have to go, Alvy? Why can’t I stay here in Whithorse? Breed horses for the family or something?”

“Don’t gulp it, sip it,” said Alvo. “The King needs just so many horses, and you’re his only son.”

“Sedra should be the Heir. She’s smarter, and she’s the oldest.”

“And let Mama find out? I don’t think so.” Temmin sat up straighter. “Here’s a thought. You go to the Keep and be the Heir and I’ll take your job.”

Vicki's Comments: I'll preface this by saying I know nothing about this genre, so please forgive me if I say silly things!

This cover is very "Art Nouveau" to me. It gives it an artsy feeling, but I'm not sure it gives me a genre. When I look up the book covers from Kushiel, I get a much different image. I would highly suggest a re-design of the cover, making them look and feel much more like Kushiel's covers. (Not that you want to blatantly copy them, but if you could design a cover that might be used as a Kushiel cover, you'll be much better off, IMHO.) What you want to do is appeal to the same audience as Kushiel's audience, so making a cover that looks similar would right away tell the fans that they probably will be getting something similar in your book.

The description could use some tweaking. I would at least cut 'suddenly' from it, but maybe that's just because I have an aversion to the word. ;) The rest isn't bad, but I think it could be better. Outside opinions might help.

The beginning of the book doesn't have a tight POV, which does bother me, but might not bother other people. I'm the kind of reader that likes to know whose head we are in right away. The 'let's start with omniscient POV and move in' beginnings get under my skin. But I totally admit this is a personal preference. I'm just wondering how many other people don't like that sort of thing. I'd ask for other opinions on the beginning of the book as well.

Honestly, I think if the cover were changed, it would do much better. What do you guys think?
Posted by Victorine at 5:25 PM