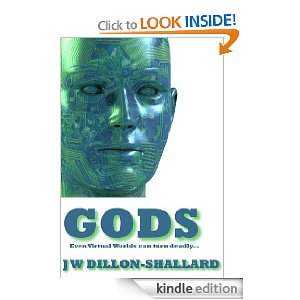 The world has come out of Global Depression a very different place. With startling power shifts on the world stage and game changing technology advances, warfare has matured into the Information Age and the Third Realm is the latest battleground.

The virtual game environment of Third Realm is a rich and deadly fantasy setting, where ultimate power rests with a competitive pantheon of player controlled gods. However, a shadowy cult with a mysterious agenda have begun to resort to real world violence to rip control from even the most powerful of gods.

Stephanie Kane is the newest recruit to the Information Warfare department of Omega Division; Europe's elite armed service. When the Elder God of the Third Realm is brutally murdered in real life, she is given the task of infiltrating the game to investigate.

The Third Realm and reality quickly collide and the edges between them begin to blur.

Who are the mysterious Order of Aurele? How do they exert so much power in the real world and why are they so determined to use their power to rule a virtual game world?

Events cause Stephanie to enlist the help of two young teenagers. Lara, a deadly assassin in the Third Realm, in reality a Dance student with her own secrets. James, an academy student with a bright future and a powerful Mage in the game, is enjoying the adventure of his life time, until his family come under threat.

Together they will face dangers in multiple realities and uncover a secret nations will kill for, a secret that could change the course of humanity itself.

From Special Forces raids, gun battles and airstrikes, to melee battles, magic duels and a struggle between Gods, Angels and humans...

Relevant, engaging and thought provoking, GODS is a must read.

The jewelled eyes of the ornate gold statue opened and the Elder God looked out, surveying his richly adorned High Temple.

The God rose amorphously, stretching to fill the Temple like an invisible mist. He briefly admired the twelve-foot high statue created in his image, before focusing his attention on the hundreds of worshippers who were kneeling around his High Altar. He felt each of their prayers as a warm hum in the back of his mind.

As he watched, a slight golden glow emanated from those who were praying to him.

This was the Elder Mass, a weekly ritual to honour the Elder God. Similar scenes were currently being performed at his Temples throughout the Third Realm. He couldn’t imagine any God feeling more powerful than he did now, basking in the concentrated faith of his followers.

Silvana, his High Priestess, stood at the Temple’s High Altar. Dressed in pale blue robes, she smoothed her long silver hair away from her face, before beginning a ritual of blessing. As she spoke the Holy words, a light formed around her hands.

The glow from the worshippers rose into the air above their heads. It formed a rippling wave that filled the God, before it fell and settled back on the worshippers again. The God savoured the resulting momentary sensation of power and bliss.

The worshippers also felt a sense of euphoria and looked up from their prayers in wonder.

The High Priestess smiled and raised her arms theatrically as she spoke:

‘Praise be to El, Lord of the two rivers and Elder of the Gods.’

‘Praise be,’ the congregation murmured in reply.

The God allowed his form to rise through the high vaulted ceiling and out into the world.  The bright sunlight warmed him as he stretched and expanded again, floating above his prosperous domain.

Vicki's Comments: I think the cover needs work. I think it lacks a professional feeling, which might only be the words because I like the picture of the person. That does give me a techno image. I might get some other opinions on the cover. If the genral consensus is that it needs work, I would hire a graphic designer to give it that final polish.

The description should be shorter and get right to the main character and their conflict. The back story can be left out, or summed up in a short sentence. We don't need to know the entire world this book is set in, just enough of the plot to know if we would be interested in buying the book.

I would have liked the story to begin with the protagonist. The God's point of view didn't capture me. I also was wondering about the single quote marks for dialogue. Is that a regional thing? I wasn't aware that any countries used this punctuation. I might hire an editor.

What do you guys think?
Posted by Victorine at 2:06 PM