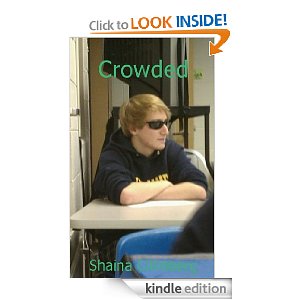 Cole Martin is trying to live for God, even though he made a mistake that costs Emily Davis and her parents' trust in him. Now, he is making every attempt he can to win her back. Josh Summers, the new boy with a dark past, also has his sights set on Emily who seems to enjoy the flirtation for a while until things get ugly.

Cole was ignoring the chatter of his classmates before history class started, when the cell phone beeped.  Everything inside said to turn the phone off, but the unwillingness to wait until lunch period took over. A sext from Tanya.  The prettiest cheerleader in the school. That wasn’t really nice, considering one of Cole’s friends was a cheerleader. Still, it was the truth.

When Cole was baptized last month, he became a Christian and truly wanted to to change everything for Christ. The moment Cole typed a message about wanting sex with her and pressed “Send”, he realized it was a mistake. This would ruin his relationship with God and with his new girlfriend. Things had been going so well between him and Emily Davis.

A candle flickered in the small, dimly lit Italian restaurant. Cole Martin inhaled the final slice of pizza and waited for Emily to finish chewing her last bite. Then, he got a wad of wrinkled money out of his stained jeans, which Emily always had compliments on.

Emily asked, “You sure?”

Cole fingered the checkered table cloth. “Yeah. I had a job at the guitar shop this summer. My treat.”

A smile lit up her brown eyes. “Thanks.”

Then, Emily groaned, “I hate that summer’s over.”

Cole chuckled in agreement.. “Yeah. Maybe we should protest the start of school.”

The next day, Cole rested his head into skinny arms on the desk before class started. He made sure the cell phone was turned off, just in case anyone else tried to sext him. That way, there wouldn’t be a temptation to once again fall into and lose another night of sleep over.

Emily walked up to Cole’s desk.   “We should go

Vicki's Comments: The cover needs work. The photo of the teen at his desk doesn't feel like a book cover image. It doesn't give me the genre at a glance, although I do assume this is a book for teens, so you've got that going for you. I would try to make the cover look more like other book covers. I would also change the font, and the font color.

The description isn't bad, I think it could explain a little more about what's going on. It's a bit vague, and when I'm trying to decide on what to read, vague descriptions aren't that helpful. What mistake did he make? Did he cheat on Emily? Did he get drunk at a party and do drugs? What does 'things get ugly' really mean? I'd like to know a bit more.

There are some good things in the beginning, however I think it needs some work. I would join a critique group and run at least the first few chapters through to tighten up some of the prose. There's a story here, I like the premise of it, but I do think it needs some polishing up.

What do you guys think?
Posted by Victorine at 8:54 AM