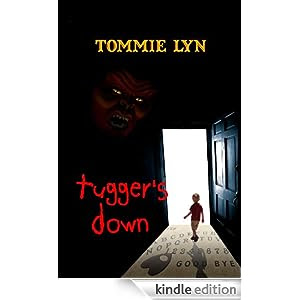 Author: Tommie Lyn
Genre: Occult/Paranormal
How long it's been on sale: Jan 2010
Current price: $.99
Total sold so far: 52
Link to book on Amazon: Tugger's Down

Salem, Massachusetts: A pregnant teen dabbles in the occult with a Ouija board and unleashes an unspeakable family secret on her unborn son, Tucker.

Pensacola, Florida: Lacey Cochran, a university student, has her future all mapped out. Until Porter O'Brien drives the wrong way in a one-way parking lot to take the only available parking place. He gets to the Admissions Office ahead of her and signs up for the last seat in the class she needs most.

How will the lives of Tucker Farnsworth, Lacey Cochran and Porter O'Brien entwine? Can Lacey and Porter overcome the horrendous threat to little Tucker?

A tiny skid. A jerk. And the planchette skittered across the Ouija board, came to an abrupt stop and pointed to the word “Yes.”

Olivia Farnsworth took her fingers from the small piece of wood that rested on the board and gave Tiffani Adams a skeptical glance from slitted eyes. “You did that. You made it move.”

“No, I didn’t.” Tiffani’s face darkened.

“Yes, you did. Even in this dim light, I can tell you’re blushing. You always blush when you lie.”

Tiffani ducked her head. “All right. So I lied. So I moved it. So sue me.”

“See, I knew this was fake.” Olivia crossed her arms and tilted her head back to look down her nose at Tiffani. “I told you these things don’t work.”

“Well, it’s true. Heather and Joannie and I play with Ouija boards a lot. It’s fun.” Tiffani leaned forward and lowered her voice. “And this board was Grandma Tessie’s. I found it at her beach cottage last weekend and sneaked it home in my backpack. Since Grandma Tessie did lots of stuff, read tea leaves, even did tarot cards, this is bound to be a good board.”

“I don’t care,” Olivia said. “It didn’t actually move like you said it would. You made it move.”

“You were getting impatient. Like always. So, I was trying to keep you interested until, you know, until it started working.”

Neither girl said anything for a moment, each eyeing the other to see if she would give in. Usually, it was Tiffani who gave in first and allowed her cousin Olivia to win their frequent contests of wills.

“So, give it a little time. Okay? ’Cause it’s really lots of fun once it gets going. And spooky.”

Vicki's Comments: After looking at the cover, and studying it, I see the Ouiji board at the bottom. But it took a while for me to see that it was a Ouiji board, and since that is a major part of your book I might make it more obvious on the cover. I do like the dark face. I think the typography can be improved. I'm not a huge fan of the child handwriting look.

The product description kind of confused me. I like to be introduced to a character in the blurb. The pregnant teen isn't even named, so I would definitely name her. The idea of a pregnant teen playing with a Ouiji board is a strong one, IMHO. The driving down the wrong way of a street, not so much for me. It seems like a strange detail to put in a description where you're trying to give an overview of the major conflicts of the story.

I think  your first 300 words are good. It plops me in the middle of a scene, with some girls playing with a Ouiji board. They act a little young for one of them to be pregnant, but maybe this is a few years earlier. I think it is a good beginning, the only issue I might pick at would be I couldn't tell whose point of view we were in. I got the feeling we were in Olivia's point of view, but there were some slips that described Olivia from what would be Tiffani's point of view. That was the only thing that stood out to me.

What do you guys think?
Posted by Victorine at 10:14 AM