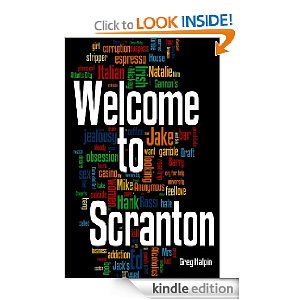 Marketing: I post links on Facebook and ask friends to share. I post on The Office's FB page because the book is set in the same city as the show. I give away a copy on Goodreads each month. I created trailers that have received almost 2,000 views. I comment on relevant news articles and blog posts and mention my book and post a link. I've sold books at two local book festivals. A friend in NYC occasionally rides the subway with my book visible. The cover grabs people's attention and results in hits on my website from NYC and some sales. I've sent copies to some NPR hosts because the book mentions NPR in a few scenes. I sent copies to local newspapers to review. I gave away about 150 print books. I've tried Google and Facebook Ads but they not work well.
Total sold so far: 335: 200 ebooks, 135 print copies.

Link to book on Amazon: Welcome to Scranton

It's a wild ride through Scranton in this darkly funny and touching story about friends in their twenties trying to figure out life in their hometown. The boundaries of friendship are tested as one of them hits rock bottom.

Welcome to Scranton paints a portrait of a small town that includes political corruption, a disgraced teacher, and the hilarious antics of young men.

Someone was banging on my door in the middle of the night while I was sound asleep. The noise worked its way into my dream where it was a phone ringing. I rolled over in bed, picked up my real phone and answered it. No one was there, of course. The noise didn't go away. I reached over to my alarm clock but no combination of pressing the plastic buttons put an end to the sound. Instead, I accidently knocked it off the bedside table. The crash of the clock hitting the hardwood floor woke me enough to realize someone was at the door.

I looked at the clock on the floor. It was almost three in the morning. Who the hell was it? I rarely had visitors at proper hours, let alone at this hour. My apartment was on the fourth floor of a building that didn't have an elevator. Even friends didn't want to climb all those stairs.

I got up from the bed and walked down the hallway to the door. I felt a bit anxious. There was a break-in across the hall the week before. No one was hurt, but everyone in the building was on edge since. I looked through the peephole. My eyes were blurry and I couldn't make out who it was. I cracked open the door, leaving the chain latched.

It was Ed Rossi, an old friend who moved into a first floor apartment a few months before.

"Huh?" I said and unlatched the lock and opened the door.

"It's three in the morning. What are you doing here?"

Gina's Comments:
First of all, I like the cover. The lettering style is great. It's colorful and intriguing. I'd pick that book up to figure out what it is about. On the down side, I can't possibly figure out what the book is about from the cover. So...there's the good and bad of that. But artistically, very cool.
$2.99 looks like a good price to me.
Hmmm. Autobiographical fiction. That would not be a genre I would choose to read. I do not know what the readership is for that. Is it limited? For me, I would be interested in autobiographies of famous people. Are you famous?
My first thought is if you've sold 335 copies, that's not too shabby. It IS selling. Sounds like you're doing things right regarding marketing.
I think the product description is lacking. It didn't make me want to read further. It's a bit detached from the story. Don't tell me, show me. You're telling me it's a wild ride...but I don't see it. Show me why.
The first sentence has the word 'was' twice. 11 'was's' in the 1st 300 words. This prompts me to ask if you are involved in any writing groups, critique groups, or if you have taken any writing classes.
The 1st 300 did nothing for me, my friend. I am guessing this is why your book isn't selling. Nothing in that made me want to turn the page or read more. Why is your life so interesting, I want to read about it? You have to communicate that right up front. Did you and your friends uncover political corruption? Did you all do something crazy and end up in jail? What is the story that will make me want to read this? If this is just a bunch of guys being guys...uh...that's just not interesting. If it's a bunch of guys who do something amazing...then yes, count me in. If there is a moral to the story...something you all learn...count me in. But you'd better hook me in that first 300 or I won't even give it another look.
My advice: workshop it. Get some other eyes on the story. There may be a story here, but I can't tell from the cover or the blurb.
Posted by Gina Barlean at 7:03 AM